The Exhibition was organised by Sir Anthony de Rothschild (1810-1876), at the suggestion of his wife Lady Louise (1821-1910). Anthony was a committed countryman who, in 1851 (the year of the Great Exhibition, held in the Crystal Palace in London’s Hyde Park), had taken up residence in Aston Clinton. In 1854, he had begun to remodel the mansion. The architect George Henry Stokes, assistant of Joseph Paxton (who had designed the great Rothschild house Mentmore Towers for Anthony’s brother Mayer Rothschild) and the builder George Myers produced a neo-Classical property, with a land-scaped park and gardens. The house was not ostentatious, and was described by Lord Rosebery as "the only Rothschild mansion that could be called a gentleman’s house."  The house and park became the setting for many entertainments, both formal and intimate.  Anthony was the owner of a number of successful racehorses, and Aston Clinton hosted shooting parties at which the Prince of Wales was a frequent guest, while distinguished artists, such as Hallé, were invited to perform at the family’s parties.

Anthony and Louise were noted for their enlightened views of the responsibilities towards their employees and their tenants. The whole family took a close interest in the development of the community, and the Rothschilds transformed the estate and village.  A large number of workers' cottages were built and The Anthony Hall in the village was erected by Louise in 1884 in memory of her husband.

In 1868, Anthony took the concept of the Great Exhibition, and applied it on a more local scale, in an effort to demonstrate the range of creativity and skills in a small rural community. Central to the exhibition was the celebration of agriculture and cottage husbandry and traditional Buckinghamshire crafts. The original intention to focus on Aston Clinton and its immediate neighbourhood was rapidly left behind as applications to display crafts, artefacts and produce poured in from an area more than 20 miles across and covering 50 parishes. The fact that small rural industries, often cottage work undertaken by individuals, might merit a place in an exhibition aimed at a broad range of society, encouraged participation in just the way that Anthony and Louise had intended. Exhibits demonstrating individual crafts – building furniture, tool-making – were particularly welcomed as a means of raising standards and of encouraging self-help initiatives to relieve poverty. A special prize was to be awarded for the best model of a modern farm cottage to be submitted by a local carpenter or builder, a contribution to the great movement of the time to provide cheap but hygienic housing for the rural community.

In the Autumn of 1867, Lady Rothschild issued a ‘programme of guidance’ for would-be entrants for the exhibition to be held in May the following year. There were five classes of Exhibitors: 1. Skilled Artisans and Tradespeople; 2. Labourers, their Wives and Daughters; 3. School Children; 4. Domestic Servants; 5. Gentlemen, Yeomen, and others. Intending Exhibitors were required to send their names and a list of their contributions before the first day of May, addressed to ‘Lady de Rothschild, Aston Clinton’.

More than 3,000 exhibits were eventually submitted and displayed. The ‘rapid, tasteful, and systematic arrangement’ of the exhibits was made by Lady de Rothschild, and her daughters Miss Constance and Miss Annie de Rothschild,  and the Rev. C. Shilson, assisted by Mr. George Goldsmid. Baron Ferdinand de Rothschild (1839-1898) was one of the panel of judges.

The Exhibition opened on 1 June on a four-acre site at Halton Park on Sir Anthony’s estate. At one o’clock, a band of Grenadier Guards and a choir of local village school children took up their positions on the lawn. Past a Guard of Honour formed by the Aylesbury Corps of the Bucks Volunteers, filed Sir Anthony and his family with an entourage of dignitaries. The Prime Minister, Benjamin Disraeli and his wife were guests of honour. More than 5,000 visitors attended the Exhibition on its first gala day, at a cost of two shillings per head. On the final Saturday, 300 prize medals were distributed. The Gold Medal, for cottage design, was awarded to Mr A. Mayne of Aylesbury, with plans for cottages which he proposed to build for £225 a pair. The bronze medal in the Archive collection was awarded to Sarah Tomlin of Aston Clinton for embroidering a baby’s shirt. The reverse of the medal carries the monogram of Sir Anthony de Rothschild, with the inscription: ‘Halton Aston Clinton Industrial Exhibition’ and the family motto, ‘Concordia Industria Integritas’. On the obverse the inscription, ‘Let Truth and Concord ever be the Faithful Friends of Industry’.

For further information about the exhibition, see Whatever happened to Sarah: a memento of the Halton Industrial Exhibition of 1868 in The Rothschild Archive Annual Review 2000-2001. 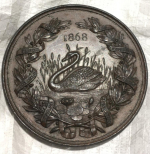 Medal awarded at the Halton and Aston Clinton Industrial Exhibition 1868

Disraeli opening the Exhibition (from the Illustrated London News)