This month, Deputy Archivist Natalie Attwood takes a personal look at the often neglected flora and fauna of our roadsides, and reflects on the relevance of today's '#NoMowMay' campaign to early conservation work by members of the English Rothschild family.

Whilst browsing social media the other day I came across a post about a campaign to save our native wildflowers and the ecosystems that depend on them.  I turned to my husband and said the classic Rothschild Archivist line … “The Rothschilds did that first you know!”  I can’t count how many times I have said this to someone only to expand on the tale; the listener at first usually politely nods and then starts to enjoy and even become enthralled by the information. And this tale includes not only one, but two pioneering members of the Rothschild family – Lionel de Rothschild (1882-1942) and Miriam Rothschild (1908-2005).

The social media post that sparked my interest was created by an organisation called Plantlife, whose mission statement is “Our countryside: save it with flowers.” Part of their campaign is to work with British councils to encourage more wildflower friendly road verge management. Although the pandemic has brought a great many challenges, there have also been some positive outcomes including the success of #NoMowMay which has helped transform roadside verges into havens for wildflowers and the wildlife they support.

Lionel de Rothschild described himself as 'a banker by hobby, a gardener by profession.'  Senior Partner of the London Rothschild bank, gardening was his real passion. His Exbury estate of 2,600 acres gave him ample space to develop his enthusiasm for horticulture.  He became involved in the hybridisation of rhododendrons, for which he is perhaps most famous, creating over 1,200 new varieties. Lionel was also an orchid expert and cultivated many varieties in his purpose-built Orchid House. Always searching for new species, he sponsored many plant hunting expeditions with the leading explorers of the day, such as Frank Kingdon Ward, George Forrest and Joseph Rock. He was also in regular contact with gardeners and horticultural experts around the world.

Under the 1925 Roads Improvement Act, County Councils were given power to take in marginal highway land and to lay out verges with trees and shrubs, but they had no expertise so poorly-chosen species were planted badly and died through lack of maintenance. The Roads Beautifying Association was founded in 1928 (with its patron as HM the Queen) by Lord Mount Temple, the then Minister of Transport, to provide an organisation through which the voluntary services of horticultural experts were made available to County Councils to advise them in the planting of highways and the preservation of trees. Planting advice was also extended to new industrial estates and the rehabilitation of slag heaps and other derelict land. Recognising the importance of planting native species alongside these industrialised sites ensured that the wildlife that occupied the areas long before development could continue to share these spaces. Lionel's passion for gardening made him an ideal choice for membership of the Association, and his skills and connections with experts around the world were applied to his chairmanship of the Association’s technical sub-committee.

The Association had the aim of increasing the publicly maintainable biophysical environment around the new roads being built to accommodate cars around the United Kingdom.  The organisations’ publications, including Roadside Planting (1930), considered the planting of central reservations, the use of appropriate species (native trees in the countryside and ornamentals in the town), using evergreens for wind protection and planting groups of trees to enhance significant views.  The Association was also instrumental in advising highway authorities on how the planting of trees and shrubs could aid road-safety.  For instance, they listed trees which dropped their leaves gradually to prevent the build-up of leaf-litter, advocated the growing of low shrubs to improve visibility on corners and at junctions and the planting of a variety of trees and shrubs to prevent monotony for drivers.  For almost a decade, the Association existed on a voluntary consultative basis, increasing its circle of contacts among local authorities and doing more and more work. In 1937 the Ministry for Transport gave it a grant for promoting its work of £200 a year and urged all local authorities to consult the Roads Beautifying Association.

Amongst Lionel’s papers in the Archive we have a few reminders of his work with the now largely forgotten Association. The Annual Report for 1937-1938 is particularly interesting with its black and white photographs of the newly planted roads clearly demonstrating the impact of the Association’s efforts. The same underlying philosophy to preserve and enhance our environment continues in the work of organisations such as Plantlife today.

The importance of wildflowers

Lionel’s cousin, Dame Miriam Rothschild (1908-2005) was a world-renowned naturalist, entomologist, and conservationist who highlighted the need to provide natural habitats to attract wildlife. The gardens she created and nurtured at her estate at Ashton Wold in Northamptonshire were described as ‘an outstanding example of wildflower and grassland gardening’.  A prolific author, in her book The Rothschild Gardens, Miriam described her passion for horticulture and the natural world, recalling how she would often create wildflower seed bombs which she encouraged her children to throw from the car windows onto the roadside verges! Miriam’s seed bomb mix would include Ox-eye daisy, Buttercup, Ryegrass, Knapweed, Cocksfoot, Meadow fescue, Rough hawkbit, Hawkbit, Tall oat grass, Knot grass, Timothy, Scarlet Pimpernel, Primrose, Greater plantain, Yellow rattle, Sorrel, Birdsfoot-trefoil, Vetch, and Red clover.

Miriam's expertise in nature conservancy led to her advising HRH the Prince of Wales when he was creating wildflower meadows at his Highgrove Estate. Seed ball tins, (Bee-friendly Mix and Butterfly-friendly Mix) inspired by Miriam can be ordered from the Highgrove online shop. Miriam would no doubt be pleased that wildflower seed bombs are now gracing the palms of the general public almost 40 years after her early experiments!

In 2013 Plantlife revived the campaign for native species to be allowed to flourish on our roadside verges.  It is understood that over 700 species of wildflower grow on the UK’s road verges, which accounts for almost 45% of our total flora.  This flora is habitat and feeding ground for a plethora of wildlife including bees, butterflies, birds, and bugs.  With nearly 500,000 kilometres of rural road verge in the UK, these areas are significant to our ecosystems and successful agriculture.  If wildflowers can flower, then pollinators can work their magic and seeds can ripen and fall to the ground, creating year after year better biodiversity.  There are of course priorities for safety and access, alongside budget constraints, and difficulties with the collection of litter, but by mowing slightly later in the year it would benefit the health of our verges, hence the #NoMowMay campaign, which currently has the backing of over 50,000 members of the public, the Prince of Wales’s Charitable Foundation, and public messages of support from horticulturalists such as Monty Don, Alan Titchmarsh, Germaine Greer, and Sarah Raven.

Both Lionel and Miriam volunteered their time and expertise to champion environmental causes, helping to shape a better world for future generations, one with bugs, botany, and benevolence in equal measure. 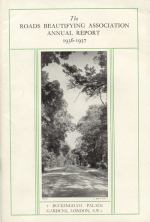 Designs for planting of an oval island (roundabout) on the Exeter By-pass c.1936