Receipt for payment of the first instalment of the Suez Canal loan, 9th March 1876

Lionel Nathan de Rothschild (1808-1879) was the eldest son and main business heir of Nathan Mayer Rothschild. Under his direction, business grew, and Lionel is remembered in business for his assistance to the British Government in 1875, helping his friend, Disraeli, secure the necessary sum to procure the Khedive of Egypt's share in the Suez Canal.

The building of the Suez Canal

The Suez Canal Company (Compagnie Universelle du Canal Maritime de Suez) came into being on 15 December 1858,and over the next 11 years the canal was built, and although the British recognised the canal as an important trade route, they objected to the use of forced Egyptian labour to build it, and perceived the French project as a threat to their geopolitical and financial interests.

The purchase of Suez Canal shares by the British Government

Initially international opinion was sceptical and Suez Canal Company shares did not sell well overseas. Britain, the United States, Austria and Russia did not buy any shares, although all French shares were quickly sold in France. The canal opened to shipping on 17 November 1869, and had an immediate and dramatic effect on world trade, playing an important role in increasing European penetration and colonization of Africa.

External debts forced Said Pasha's successor, Isma'il Pasha, to put up his country's shares for sale. In 1875, the London banking house of N M Rothschild & Sons advanced the Prime Minister, Benjamin Disraeli, acting for the British Government, the vast sum of £4million to purchase Suez Canal shares. Disraeli was a close personal friend of Lionel de Rothschild, and according to legend, this was transacted on a gentleman’s agreement, with no documentation, a technically unsecured loan for a sum of several £billion today. The funds were repaid within five months; however, Disraeli was accused by William Gladstone of undermining Britain's constitutional system, due to his lack of reference or consent from Parliament when purchasing the shares with funding from the Rothschilds. France still remained the majority shareholder in the canal.

I am commanded by the Lord’s Commissioners of Her Majesty’s Treasury to acquaint you that the Bank of England has been authorized to pay to you on the 10th instant, from the account of the Exchequer, the following amount, viz :-

£1,500,000 being the first instalment of the amount payable by Her Majesty’s Government, for the purchase of the Shares of the British Government in the Suez Canal, which formerly belonged to the Khedive of Egypt.

Read more about the Suez Canal purchase here ». The monograph 'You Have It, Madam': the purchase, in 1875, of Suez Canal shares by Disraeli and Baron Lionel de Rothschild by Victor, 3rd Lord Rothschild (London: privately printed, 1980) also gives more information about this event. 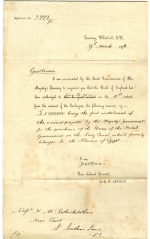