In March 1809, the lease for property in New Court, St Swithin's Lane in the City of London was assigned to Nathan Mayer Rothschild. From these beginnings, Nathan's London house, N M Rothschild, dealt in bullion and foreign exchange and issued British and foreign government loans. Over the past 200 years New Court has been re-built, but St Swithin’s Lane remains home to the London bank.

Nathan was born in Frankfurt in the Judengasse 16 September 1777. He died in that city on 28 July 1836. In the intervening 59 years, Nathan Mayer Rothschild - the name he never changed despite the honours offered and declined - led his brothers to the pinnacle of the financial world. Nathan almost burst out of Frankfurt, the first of his brothers to found a branch of the family firm, to settle in England in 1798, initially as a textile merchant in Manchester and subsequently as a London bill broker. Nathan was a popular 'Manchester man', an indulgent father, a respectful husband, an admired (if occasionally feared) brother. Building on this foundation and wedding it to the Rothschild network, Nathan was credited by his brothers with securing for them the best opportunities to achieve their position in the world of finance. He was a larger than life figure on the London exchanges, giving himself totally to his business, permitting no half measures. His brusqueness and off-handedness were legendary, and his tactics were examined and re-examined time and time again.

His marriage in 1806 to Hannah, daughter of Levi Barent Cohen, gave him a position in society and a range of business contacts which might have taken him years to achieve alone. Moving to New Court in 1809, Nathan initially raised his family there too, but by 1816 had found a villa at Stamford Hill to provide more space and better air. In 1825, the family's town home was established at 107, Piccadilly and in 1835, Nathan acquired Gunnersbury Park in west London.

The stock in trade of the London merchant was Bills of Exchange. Once he arrived in London, dealing in bills of exchange became a central element in Nathan’s business. The bills he had issued in Manchester had gained a sound reputation for their reliability, providing a solid basis for his financial activities in London. Bills were heavily traded among merchants and banker’s on the Royal Exchange at a discount and it was this activity in which Nathan developed an unrivalled skill. Preserved in the Rothschild Archive is Nathan’s bill-case, inscribed 'N M Rothschild, 2 New Court, St Swithin's Lane', which he carried 'on Exchange', together with examples of bills traded. Although government loan contracting soon eclipsed this side of his business, it had served to lay the foundation for his reputation. 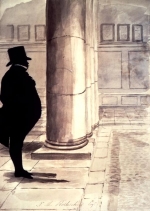 ‘The Shadow of a Great Man’ by Edouart. Caricature of Nathan Mayer Rothschild published in the month following his death and showing him standing at his favourite pillar at the Exchange.