The Rothschild  Archive holds one of the largest private autochrome collections in the world. Read more about this fascinating glimpse into the Edwardian world.

The autochrome, the first widely available colour photographic process, was launched in Britain in September 1907. The invention of the French Lumière brothers, the process, which used specially produced autochrome glass plates coated with dyed starch grains, each of which acted as a tiny coloured filter, had first been demonstrated publicly in Paris.

The collection also includes Lionel's original photographic equipment including wood and brass cameras by Ross of London and Newman & Guardia in leather cases, lenses, an autochrome viewer in polished mahogany and red leather, glass plates, frames and storage boxes, together with a booklet 'How to Achieve Success in Photography'. 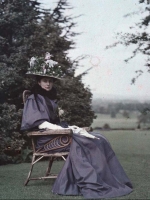