For the Spring season, we look back to one of the enduring passions of the Rothschild family – horticulture and the creation of beautiful and inspiring gardens.

On the 23 March 2019, Exbury Gardens in Hampshire opens for the season. Exbury, famed throughout the world for its rhododendrons, azaleas and camellias (and between the Wars, its orchids) is a stunning sight from March to August. This year the displays will be extra special as Exbury marks its centenary in 2019.

Lionel de Rothschild (1882-1942), “a banker by hobby - a gardener by profession" developed an interest in horticulture at a very young age and is said to have planted his first garden at the age of five at his father’s estate at Gunnersbury. In 1919, he purchased the former Mitford estate at Exbury in Hampshire, bounded by the New Forest, The Solent and the Beaulieu River with the proceeds from the sale of his uncle Alfred’s house at Halton in Buckinghamshire which he had inherited.

The creation of Exbury's gardens

It was Lionel’s gardening passion which led him to choose the Exbury estate with its 2,600 acres. The climate was gentle here and the soil was acid, ideal for the rhododendrons which were to become his passion. The estate included some 250 acres of overgrown woodland. Labour was recruited in huge force to create the gardens: a team of 150 men and 60 trained gardeners were employed to clear the land, lay paths and manage the planting, and 22 miles of irrigation pipes were laid. He constructed a private railway to transport rocks to build the largest rock garden in the country. Two acres of greenhouses were put up and thousands of plants were introduced. Lionel worked tirelessly to bring shapes and colours together to please the eye. The village was expanded to house the massive workforce, and a water tower containing electric generators was installed to supply the village houses with water, and bring electricity to the manor house and greenhouses. Here Lionel grew orchids and developed hundreds of new hybrid rhododendrons and azaleas for which the estate has become famous.

Lionel co-sponsored plant-hunting expeditions to places as isolated as the Himalayas to collect seed for plant growth and experimentation. Lionel had several strands in his hybridisation programme, but it was generally dominated by a desire to produce increased hardiness, better flowering and improved colours. He was also keen to extend the flowering season. In the years that Lionel devoted to Exbury, he made innumerable crosses of which he kept only the best. The reject seedlings, some having taken years to grow, would be unceremoniously consigned to a bonfire as part of his rigorous selection programme. Out of the survivors only what he considered the very finest were kept. His stud book records 1,210 hybrids that he considered successful. He further analysed these and decided that 452 were worthy of being individually named and registered with the Royal Horticultural Society (RHS). Specimens from Exbury won many RHS awards: Lionel’s orchids won the Schröder Orchid Challenge Cup, the DuPont Orchid Trophy and the Cain Cup, and his rhododendrons won many awards and certificates of merit.

Lionel also remodelled Exbury House with neo-Georgian designs by William Jenkins, and he created an idyllic family home for his wife, Marie-Louise Beer and his young family, Rosemary, Edmund, Naomi, and Leopold. The gardens were first opened to the public in May 1930, with a fee of one shilling admission charged, the funds collected being donated to the Southampton Hospital Rebuilding Fund. Lionel de Rothschild died in 1942, aged just 60.

Exbury House was called to play its part in the War effort. Renamed ‘HMS Mastodon’ (a stone frigate) under Royal Navy control, it became one of the key centres for the planning of the D-Day landings. At the end of the War, it was left to Lionel’s son, Edmund de Rothschild (1916-2009), to repair the damage of the war years. He did so with vigour and after his return from active service in 1946, he set about the restoration of Exbury Gardens. Over the next 50 years he replanted some three-quarters of the acreage, and produced several dozen new rhododendron hybrids. He also developed the highly successful Solent Range of Exbury deciduous azaleas, which are noted for their strength and colour. In 1955 he opened Exbury Gardens to the public. Well into his eighties, Edmund de Rothschild would hurtle around Exbury's network of garden paths (designed to be wide enough for his father's Armstrong-Siddeley) in a small car with the number plate 'NMR 1'. He would stop the car it is said, to pass the time of day with the visitors, and liked to get out to hack off dead branches and blooms with a stout rhododendron-wood stave.

The Gardens continue to be looked after and developed with loving care by the current generation of Exbury Rothschilds, and Exbury remains today not only a significant name in horticultural history but a living and colourful tribute to a passion. In 2001, the American Rhododendron Society recognised Lionel de Rothschild's significant contribution, posthumously bestowing on him a Pioneer Achievement Award. Today the Gardens and Steam Railway (created by the late Mr Leopold de Rothschild (1927-2012) are a spectacular 200 acre (80 hectare) site.

In 2019 Exbury celebrates its centenary year with special events, exhibitions and new gardens. To find out more about what’s on at Exbury in 2019, visit Exbury 100 » 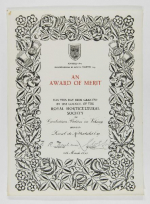