In all the cities where they settled, members of the Rothschild family sought to apply their wealth, patronage and influence for the good of their fellow citizens, supporting Jewish and non-Jewish charities engaged with a range of social issues such as children’s welfare and education. One such charity was London’s Jews' Hospital and Orphan Asylum, a venerable institution with which the Rothschild family have been involved for over four generations.

The collections of The Rothschild Archive London hold some unexpected treasures; this piece of antique furniture, acquired as a gift in 2020, is now being put on display at New Court.

The Jews' Hospital and Orphan Asylum, (today known as Norwood), was based in East London, and later South Norwood. The charity can trace its origins back to 1795, when The Jews’ Hospital was established by the financiers Abraham and Benjamin Goldsmid, who invited subscriptions from their friends for the foundation of a hospital to provide relief for the aged and an education for the children of poor families. In just two years the brothers raised £20,000 (around £2 million today), and a building in Mile End Road in London’s East End was purchased for £3,300. The Jews' Hospital opened on 28 June 1807, the building housing a boarding school for children of respectable poor Jewish families, and a home for the elderly. By 1860, the Hospital accommodated 100 boys and 40 girls, who were greatly overcrowded in the now 50-year old buildings. Plans were made to move the institution to the country, and this was enabled by Barnet and Isabella Meyers, who presented the Hospital Trustees with nine acres of land between Knight's Hill and Canterbury Grove in West Norwood.

A new Hospital which cost £23,000, opened at the Norwood site in 1863. Built of red brick, with patterns of black brick, the building resembled a large Jacobean mansion with three storeys and an attic storey set in the slated mansard roof. In 1876, the Hospital merged with the Jews' Orphan Asylum to create The Jews’ Hospital and Orphan Asylum at Norwood. The Jews' Orphan Asylum had been established in 1831 in Whitechapel, initially for the children of Mr and Mrs Noah Assenheim, who had both died during the 1830 cholera outbreak. The institution housed 159 children, not all of whom were orphans; some came from families who were too poor to provide for them or who were unable to look after them.

By 1888 the Hospital accommodated 260 children and could accept no more admissions.  Plans were made to further extend the building, and new extensions were officially opened by the Duke of Cambridge on 3 May 1897. Following the 1902 Education Act, a school was established on the site under the auspices of the Department of Education, which resulted in an improvement in teaching standards; after their initial training in a trade, the boys were apprenticed; the girls most often found work in domestic service. The school closed for three weeks every summer and, in 1904, a holiday home at Margate was opened to provide a seaside break for the children.

In 1928 the institution was renamed The Jewish Orphanage. At the outbreak of the Second World War in 1939 the children were evacuated to private homes in and around Worthing on the Sussex coast, while the Orphanage buildings in Norwood were taken over by the London Fire Brigade as a training centre. After the war, the children returned, but the children now attended local schools instead of being taught on the premises, while contacts were established with families attending the local synagogues. In 1956 the Orphanage was renamed the Norwood Home for Jewish Children. In the late 1950s, new approaches in social care were developed, and ‘family houses’ (supervised by house parents) were built in the grounds to provide the children with a more home-like environment. By 1961, seven houses had been bought in neighbouring streets and some 100 children were thus accommodated; the main orphanage building thus became redundant and was closed and later demolished. As the Jewish community became increasingly centred in north London, in 1958 the remaining funds of the orphanage were transferred to a charitable trust, known as Norwood, and in 1967, Norwood incorporated the children’s’ welfare services formerly provided by the Jewish Board of Guardians (Jewish Welfare Board). Today Norwood is the largest charity serving the needs of Jewish children and families in the UK. Its services are delivered to the Jewish community by a workforce of 2,000 people, made up of 1,250 staff and hundreds of dedicated volunteers.

The Rothschilds and Norwood

Four generations of Rothschild have supported Norwood and its work. Sir Anthony de Rothschild (1810-1876) served as the charity’s President for many years. On 6 June 1861 Sir Anthony laid the foundation stone for the new Hospital building at Norwood in the presence of 2000 people. The account of the event in The Jewish Chronicle commented upon Sir Anthony's "remarkable dexterity with a mallet", recording that Sir Anthony deposited in the hollow of the foundation stone, a copy of The Jewish Chronicle and The Times for that day. As well as Sir Anthony, strong practical support came from Charlotte, Baroness Lionel de Rothschild (1819-1894) and her son Leopold de Rothschild (1845-1917). Having served on the Committee for several years, Leopold’s son, Anthony Gustav de Rothschild (1887-1961) [father of Sir Evelyn de Rothschild] became President of the charity in 1918, remaining in the post for 43 years until his death in 1961. Sir Evelyn de Rothschild (b.1931) became Norwood's Chairman in 1995 and is today one of only five Life Presidents.

This imposing 1.5-metre-tall oak chair was originally used by the President of the Board of Trustees of The Jews’ Hospital and Orphan Asylum at Board and committee meetings. For many years, the chair was in the Sir Henry Behrend Memorial Library in  the main Orphanage building at Norwood. The library was named in honour of Sir Henry Behrend, Chairman of the Orphanage, who made significant advances in the care of the children in the 19th century.

The chair is elaborately carved with the words ‘Memorial Library, Dr. Henry Behrend’. The central panel bears the Latin motto ‘Vigilans Non Cadet’ – ‘The vigilant man falls not’ and the heraldic device of a bear holding a staff. The significance of these is not recorded but the panel may have been re-used from an earlier piece or donated from a benefactor.

Find out more about Norwood and its work here »

RAL 000/2678: Ceremonial ‘President’s chair’ from  The Jews’ Hospital and Orphan Asylum; gifted to The Trustees of The Rothschild Archive by the Trustees of Norwood in 2020. 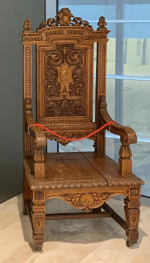 Chair' from the Jews' Hospital and Orphan Asylum