On the 14th May 1837, an ambitious young German called August Schönberg arrived in New York en route to Havana via Paris and London. He was to become known as August Belmont and he was to play a crucial role in the development of Rothschild business in the United States.

In the 1820s, the Rothschilds had achieved dominance in the field of European government loans and quickly turned their attention to business in America. In 1821 the Rothschilds had formed an association with the banking firm of R & J Phillips of Philadelphia. Phillips advised them on investment opportunities and introduced them to a new circle of business acquaintances. By 1833 Rothschilds were represented in Baltimore by J.I. Cohen Jnr, and in New York by J.L. & S. Josephs. Through these agencies the Rothschilds built up a portfolio of investments in municipal and state stock, canal and mining shares and in finance houses. In 1834, on the election of President Andrew Jackson, the London house of Rothschild was awarded the commission to represent United States' banking interests in Europe, hitherto in the hands of Baring Bros.

August Belmont (1813-1890) had worked his way up through the ranks of clerks in the Rothschild Bank in Frankfurt when he was sent to America aged twenty-three in 1837. The plan was for him to travel via New York to Havana to investigate how the Cuban economy and the various Rothschild interests there were being affected by the Spanish Civil War. However, he arrived in New York in the middle of a crash to find that the existing representatives of Rothschild (J.L. and S.I. Joseph & Co.) had gone out of business. Using his own initiative he set up an office in New York and began to act as the Rothschild agent there.

This behaviour was not initially welcomed by his employers who expected him to follow his orders to proceed to Havana, and athough the Rothschilds eventually agreed he should remain in New York, it set the pattern for a turbulent relationship between Belmont and the London and Paris houses of Rothschild. In 1837, the news that Belmont had decided to remain in New York prompted Baron James de Rothschild (1792-1868) to write 'He is a stupid young man…. Such an ass needs to be kept on a short leash.' Nonetheless the Rothschilds quickly realised the importance of having an agent based in the growing North American market, and August Belmont was to become a great financier and politician.

Belmont rented a small room at 78 Wall Street and on instruction from the Rothschilds began to purchase stock on their behalf, handling bills and trading in commodities, as well as handling the various government and railway loans the Rothschilds made in the USA. As well as making money for the Rothschild banks, Belmont became a rich man in his own right and soon began to move up the ranks of New York society, later becoming a leading figure in the Democratic party and hosting social events on a Rothschild scale at his home on Fifth Avenue.  His love for the Turf is evidenced by the Belmont Racecourse.

In 1872 N M Rothschild & Sons raised a $15 million bond issue for the City of New York to finance municipal improvements and in the following year, together with Baring Bros, raised a huge £300 million 5% funded loan for the US Government. A loan of equal size was raised in 1876, with further loans in 1877 and 1895. In America as in Europe, the Rothschilds were heavily engaged in the financing of the railroads, raising funding for the Chicago, Milwaukee & St. Paul Railroad in 1887 and for the Pennsylvania Railroad in 1908. The Rothschilds' portfolio of investments in America was dominated by stock holdings in numerous railroad companies, such as the Louisville and Nashville Railroad, the Missouri, Kansas and Texas Railroad, the Atchinson, Topeka and Santa Fe Railroad and the Southern Pacific Railroad.

August Belmont's son, August Belmont Jnr (1853-1924), took over the business upon his father's death in 1890. The Rothschilds were closely involved with the development of the New York subway network. In 1900 August Belmont & Co. signed a contract with the City authorities for building, equipping and operating a railway. In 1902 August Belmont Jnr created the Interborough Rapid Transit Co., which he went on to manage and from which he drew considerable profits. The first sections of the system - some 22 miles, most of it in Manhattan - were opened by the Mayor of New York in October 1904. For the next twenty years, Belmont & Co. sent the English and French Rothschild houses regular, detailed correspondence regarding further subway developments and the performance of the company's stock.

Belmont correspondence with the London house 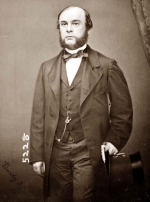