In 1882, Nathaniel von Rothschild (1836-1905) began to acquire land in Vienna to create his famed park and botanical gardens. In doing so, he also imported football from England, and thus introduced the new sport to Austria.

In 1882, Nathaniel Mayer Rothschild, grandson of Salomon von Rothschild (1774-1855) who had established the Viennese Rothschild bank in the 1820s, acquired plots including the former mineral spring, (the Heiligenstadt bad) in Vienna to create what became known as The Rothschild Gardens. Nathaniel subsequently purchased further large plots on Vienna’s Hohe Warte and established a botanical garden, under the guidance of the city Garden Inspector Anton Joli. A Japanese garden was created, together with an array of summer houses, imitation antiquities and other garden constructions in fashionable at the time. Nathaniel brought gardeners from England to develop his gardens. The gardens consisted of a park to the north with acacias, lilacs, red beeches and white birch, elm, blue spruce, cedars and pine-trees, and, in the south a large nursery operation. In the nursery, fruits, exotic flowers and palm trees were planted, the total area of glasshouses amounting to 12,000 m2. The gardens charged the public an entrance fee, and the proceeds of the ticket sales were used to fund a voluntary fire and ambulance service in the city.

After the First World War, Alphonse Mayer von Rothschild (1878-1942) who had inherited the gardens from his uncle, built a tea-house in part of the park. In 1906 it was reported that the botanical garden contained an “array of conservatories and hothouses, which furnish strawberries and the choicest fruits in profusion almost throughout the year. The greatest treasure under the glass is a giant Bougainvillea, possibly the finest specimen in the world.” The gardens were confiscated by the Nazi regime in 1938, and in June 1942, the German Reich of Vienna sold the gardens. Many of the buildings and the exotic trees and plants did not survive the war, and after the war parts of the gardens were used for the cultivation of vegetables to meet acute food shortages in Vienna. In 1950, the former Rothschild Gardens were returned to the family, who in turn gifted the land permanently to the city. In 1977 the northern part of the former Rothschild gardens was reunited with the southern part, the whole being known today as Vienna’s Heiligenstädter Park.

Nathaniel von Rothschild is credited with having introduced football into Austria. The history of football in England dates back to at least the eighth century AD, and rules were refined in the English public schools in the 1850s. The Football Association (FA) was formed in 1863, and the FA Cup was first contested in 1872. One of the gardeners' sons at Hohe Warte, returning from England where he had learnt the game, gained the support of Nathaniel for a team as a means of providing recreation for the estate staff - many of them English. With land and finance from Nathaniel, the First Vienna Football Club, the first football club in Austria, was established on 22 August 1894 in the guest-house 'Zur schönen Aussicht' which still stands today. Nathaniel set aside a pasture near to the Hohe Warte Gardens upon which to play and also said to have granted the team its blue and-yellow kits, former jockey's shirts from his riding stables. The Manx player William Beale designed the triskelion logo, also in the Rothschild colours blue and yellow, which Vienna still uses today. The team played its first match on 15 November 1894 against the Vienna Cricket and Football-Club losing by 0 goals to 4, and creating a rivalry which lasted until the dissolution of the Cricketers' football team in 1936. The city of Vienna quickly became the centre of Austrian football and by the end of 1896 there were seven clubs playing there, several of which also fielded reserve sides.

In 1897, the chairman of the Cricketers' donated the Challenge Cup establishing a competition open to all football clubs in what was then Austria-Hungary, drawing teams from Vienna, Budapest, and Prague. The Cricketers' won the first cup competition in 1897, but First Vienna followed with consecutive cup titles in 1899 and 1900. The club also made a losing appearance in the 1907 final of the Wiener Cup. By 1915 the First Vienna Football Club had fallen out of first division play and did not return to the top flight until after the war in 1919. The Hohe Warte Stadium, which remains the club's home today, was built in 1921. The club consistently finished in the top half of the league table through the 1920s, winning Austrian Cup titles in 1929 and 1930 before finally claiming the national championship in 1931. That same year the team also won the Mitropa Cup, one of Europe's first international club competitions. Vienna captured a second national title in 1933 with a third Austrian Cup following in 1937. Re-established after the war, First Vienna remained competitive, but the club faded through the 1960s playing second division football in the 1970s and 1980s. 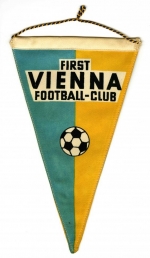