As sunnier weather approaches we explore a former Rothschild property in west London which has recently undergone a major restoration project and plans to open its doors once again this summer.

Today, the London suburb of Gunnersbury sits on a branch of the Underground’s District Line, situated between Turnham Green and Kew Gardens. In 1835, the estate of Gunnersbury Park was purchased by Nathan Mayer Rothschild (1777-1836) as his country residence.  On 1 July 1835, Hannah, Mrs Nathan Rothschild (1783-1850) received the following letter of acceptance of an offer on the property:

I beg hence to inform you that Mr Copland’s Executors will accept Mr. Rothschild’s offer of £17,000 for the purchase of Gunnersbury Park including the fixtures and timber.  Mr Rainy having been obliged to go out of town until this evening requested that I would in his absence communicate to you this result …

Your very obedient and humble servant

The original sales particulars which survive in the Archive describe the property as “a freehold estate, an elegant & magnificent mansion and a beautiful park comprising 75 acres.”  The House (later to be known as the ‘Large Mansion’) contained on the first floor “four Excellent Bed Rooms, each with a Recess for the beds, and two having large bow windows, and three other Sleeping Apartments, all fitted up with Marble Chimney Pieces and Slabs, some of which are embellished with fancy Foreign Paper… three Dressing Rooms… a Boudoir, painted in imitation of Satin Wood, with gilt mouldings and fitted up in the most correct taste, the walls being lined with festoon drapery with silk tassels and fringe, in imitation of gold…” On the ground floor was to be found “a beautiful drawing room with circular ends, elegantly papered… an Ante Room with enriched ceiling… a magnificent Library, ornamented with four scagliola ionic columns and pilasters...  a capital Dining Room, with a bow window… All of which are embellished with Marble Chimney Pieces, and otherways appropriately decorated according to their respective purposes, and forming a most complete Suite of Apartments seldom to be equalled, but never to be excelled”. The house came with numerous modern facilities such as water closets, a bathroom “lined with Dutch Tiles, the walls being painted in imitation of marble, and having a sky-light glazed with stained glass”, and a Gentleman’s Room, heated with hot air.

The sale took place on Tuesday 30 June 1835 at twelve o’clock sharp.  Advertised with household furniture such as "a fine toned Finger Organ, billiard tables and exotics and rare Greenhouse plants", it clearly caught the eye of Nathan, whose offer of £17,000 (over £2million today, although the modern property price would be much higher), was accepted. Although not as grand as many of the later Rothschild houses, Gunnersbury Park became much loved by the family, and it was to remain in Rothschild ownership for nearly a hundred years.

Gunnersbury under the Rothschilds

Moving to New Court, St Swithin's Lane in London in 1809, Nathan and Hannah initially raised their family there, but by 1816 had found a villa at Stamford Hill with more space and ‘better air’. By 1825, the family's town home was established at 107, Piccadilly, but Nathan needed a country estate, as a retreat from the bustle of the City, but also as a place to entertain – and to impress – business contacts and clients.  Many of the paintings which today hang in New Court, once adorned the walls at Gunnersbury. Nathan died in Frankfurt in July 1836; for the next 14 years Hannah continued to improve the Gunnersbury Park estate, until her death in September 1850; she is said to have collapsed while playing with her grandchildren, rolling down Gunnersbury’s verdant lawns.

In 1850, Nathan’s son Lionel (1808-1879) took over the estate, enlarging the park in 1861 and adding a pleasure lake and boat house, and installing gas lighting in the house. Lionel and his wife Charlotte (1819-1884) entertained on grand scale.  One of the most splendid functions to be held at Gunnersbury was the marriage of Lionel and Charlotte’s eldest daughter, Leonora (1837-1911), to her French cousin Alphonse (1827-1905) in 1857. Upon Charlotte’s death, the estate passed to their youngest son, Leopold (1845-1917). Leopold enlarged the estate by purchasing the adjacent property in 1889 (which became known as ‘the Small Mansion’) to provide extra bedrooms for guests. He made significant alterations to the gardens, creating a Japanese garden, a heath garden, an ivy garden and an Italian garden.  In 1917, Gunnersbury Park was inherited by Leopold’s son Lionel (1882-1942). Lionel purchased the Exbury estate in Hampshire in 1919 and from then on devoted his energies to creating his famous rhododendron gardens there. In 1925, Gunnersbury Park was sold to the Boroughs of Ealing and Acton for use as a public park and museum.  In its new guise, Gunnersbury was formally opened by Neville Chamberlain, then Minister of Health, on 21 May 1926.  The Large Mansion opened as Gunnersbury Park Museum in 1929, showcasing local history, archaeology, costume and fine art collections; evidence of former Rothschild occupation remained in the two horse-drawn carriages on display.

In 2014, Ealing and Hounslow Councils were awarded two large grants from the Heritage Lottery Fund and Big Lottery Fund's Parks for People programme to restore Gunnersbury Park. The £21m project aims to create a high quality public space allowing everyone in the community to enjoy Gunnersbury’s culture, heritage and wildlife; along with events, sports and recreational activities. Gunnersbury Museum is being transformed to restore the Grade II listed property and to create new galleries and displays.

If you find you have a spare weekend this summer, hop on the District line towards Richmond, explore Gunnersbury Park and imagine Nathan Rothschild receiving the news that his offer to purchase the estate had been accepted.  We can guarantee you’ll have an interesting day out, but sadly we can't guarantee you sunshine! 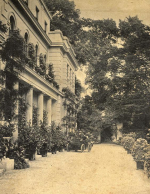