This month, the Manchester Ship Canal, one of greatest infrastructure projects of the Victorian age, celebrates its 125th anniversary. The London house of Rothschild was one of main backers of the project, a legacy of support for ground-breaking innovation which continues today.

Over the past 200 hundred years, the Rothschild businesses have been involved with most forms of transport.  The origins of the family business as merchant bankers involved the shipping of many different commodities and the Rothschild houses were involved in handling a large volume of profitable mercantile trade in staple commodities such as sugar, cotton, coffee and tobacco and bullion. The Rothschilds’ provided the finance for the construction and purchase of several important waterways. In the 1830s, the French Rothschilds, because of their interest in the mining areas of northern France and Belgium, financed the construction of the Sambre-Oise Canal, which made Belgian coal more readily available to Paris. In 1835, the Viennese Rothschilds financed a joint stock company to build the Ludwig Canal to connect the Danube basin at the Black Sea with the Rhine basin in Rotterdam.  In 1875, Lionel de Rothschild (1808-1879) undertook a personal loan to his friend Disraeli, which enabled the British government to acquire control of the Suez Canal.

The Manchester Ship Canal is a 36-mile-long (58 km) inland waterway in the North West of England linking Manchester to the Irish Sea. Several sets of locks lift vessels about 60 feet (18 m) up to Manchester. Major landmarks along its route include the Barton Swing Aqueduct, the only swing aqueduct in the world, and Trafford Park, the world's first planned industrial estate and still the largest in Europe.

From 1776, goods were transported to Manchester along the Bridgewater Canal and, from 1830, the Liverpool and Manchester Railway, but by the late 19th century, a ship canal was proposed as a way of giving ocean-going vessels direct access to Manchester, at the core of Britain's industrial heartlands, to and from the principal ports of the world.  The scheme’s supporters argued that such a canal would boost competition and create jobs: Lancashire and Yorkshire coal, Cheshire salt, Staffordshire pottery and iron and Lancashire chemicals would he carried direct to world markets, strengthening Britain's industrial advantage.  A public campaign was initiated, seeking the backing of influential financiers such as the Rothschilds. A Manchester Ship Canal bill was first presented to Parliament in 1882; but faced with stiff opposition from Liverpool, the canal's supporters were unable to gain the necessary Act of Parliament to allow the scheme to go ahead until 1885. In the late 1880s, the Canal’s entrepreneurs turned to N M Rothschild and Sons to help finance the construction of the Canal. In 1886, Rothschild, with the Bank of England, issued 800,000 £10 shares on behalf of the Manchester Ship Canal Company; the Company was to secure further funding through the London Rothschilds on three further occasions between 1886 and 1889.  Work began in 1887; it took six years and cost £15 million (equivalent to about £1.6 billion today).

The Manchester Ship Canal was as deep as the Suez Canal and almost twice as wide over its length.  When it opened, it was the largest river navigation canal in the world, and enabled the Port of Manchester to become Britain's third busiest port despite the city being about 40 miles inland.  Nathan Mayer Rothschild himself would no doubt have been proud of his business’s involvement in this mighty engineering achievement.  Manchester had been his first base on arriving in England in 1798 aged just 21.  With funds from his father's merchant house, he made his first home in the city, centre of the English cotton trade, establishing himself as an innovative textile merchant. He quickly became accepted as a ‘Manchester man’ and then after a decade, encouraged by his success, moved to London to establish himself as a banker.

The official opening in May 1894

The Manchester Ship Canal was officially opened in May 1894 by Queen Victoria.  Her visit was well documented by the national press.  The Queen left Windsor by train on 21 May accompanied members of the Royal entourage.  The train arrived at Manchester London Road at 4:30pm, and The Queen commenced three hours of ceremonial duties, which included setting in motion the hydraulic mechanism of the lock gates. The Queen returned through the city to continue her journey to her Scottish residence, Balmoral.  The people of Manchester and Salford enthusiastically lined the streets and the Queen returned their greetings.

The opening of the Manchester Ship Canal was a great success.  The Times reported:

“Before leaving the city the Queen traversed eight miles of crowded and decorated streets in Manchester and Salford, graciously returning the welcome of the countless thousands assembled on the way; and, in addition to what may, perhaps, be termed the historic act of formally opening the Ship Canal by making the brief voyage from the terminal docks to the nearest locks and setting their machinery in motion, she received and acknowledged the local addresses of the Manchester and Salford municipalities and the directors of the Canal Company… Her Majesty’s reply was: - The immense undertaking which I this day open has filled me with admiration.  Exceptional engineering as well as other difficulties have been overcome, and the commerce of the world has been brought into direct communication by sea with your great city and its neighbourhood.  I trust that Manchester may never cease to be prosperous and thrive, and that all classes of my subjects may share in the benefits attending on the success of this most important enterprise.”

Changes to shipping methods and the growth of containerisation during the 1970s and 1980s meant that many ships were now too big to use the canal and traffic declined. In 1993, N M Rothschild and Sons Limited advised Peel Holdings on its £41.5 million purchase of a majority interest in the Manchester Ship Canal Company.  Original documentation for the financing of the Manchester Ship Canal can be found in the collections of The Rothschild Archive, including correspondence with the first Lord Rothschild soliciting support for the Canal project, the 1886 Manchester Ship Canal Company prospectus, for £7.25m, with the Bank of England at Manchester.  The prospectus, only three pages long, contains a coloured map showing industry in the North West of England including; cotton, wool, ironworks, coal, salt, potteries, steelworks and chemicals.  The intended ship canal is boldly highlighted in red, running from Manchester to the River Mersey and the Port of Liverpool, from whence it could reach the rest of the world. 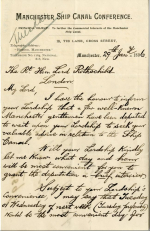 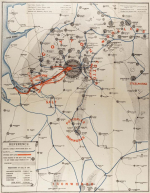