One hundred years ago this month, the Armistice ended fighting on land, sea and air, marking a victory for the Allies and a defeat for Germany in the First World War.  Known as the Armistice of Compiègne from the place where it was signed, it came into force at 11 a.m. Paris time on 11 November 1918 (‘the eleventh hour of the eleventh day of the eleventh month’).  This month, Deputy Archivist Natalie Attwood, cataloguer of the photographic collections of Robert de Rothschild, takes a look at his military service on the battlefields of Belgium and France.

When the Armistice was reached in November 1918, Robert de Rothschild, Officier interprete de 2° classe de la 133ème Division, was at Chimay in Belgium.  Robert had voluntarily enlisted to the French army as a trainee interpreter in the 1899/1900 intake.  During his training he lived at St Maximin, Creil, l’Oise, France, in the 20e Section de Secrétaires d’Etat, 2e Corps d’armée, subdivision de Compiègne.  His training lasted for three years from 12 November 1900.  It wasn’t long after the war began that he saw active service as photographs of him in the Archive collection dating from August 1914, show him in his new officers’ uniform.

Little is known about the first part of Robert’s military career; an Anglo-French menu for Christmas dinner 1914 and a telegram from 15 March 1915 congratulating him on his promotion to 2nd Class Interpreter show that he was attached to the 8th Division British Expeditionary Force.  The Division landed at Le Havre on 7 November 1914 and no doubt Robert’s expertise in several languages would have been well utilised.  Amongst Robert’s records a French army newsletter of October 1915 survives, indicating that he may have been present at the Battle of Loos. It describes an intense German bombardment in September which destroyed many Allied trenches, severed communication routes, and also a horrifying gas attack.  It is known that the winter of 1916-1917 was exceedingly cold in France and Belgium.  The bitter weather continued through March and well into April and many of Robert’s photographs show thick snow on the ground.

Robert was acknowledged by his commanding officer, Général Grégoire, for his brave actions during a reconnaissance mission on 19 July 1917.  The mission occurred in broad daylight beside a canal located between the French and German lines and yielded valuable information.  Léon Auguste Joseph Grégoire, (1861-1933) ended the War as a highly distinguished General, with a military career stretching back to the early 1880s.  In October 1916 he had been made Général de brigade, commanding the 1st Infantry Division (1st Army Corps).  The 1st Infantry Division fought at the Battle of Verdun in 1916 and the Second Battle of l'Aisne in 1917.  Although it is not known when Robert joined Général Grégoire’s staff, in October 1917 he left the 1st Infantry Division and transferred to the 133rd Infantry Division under the command of Général Valentin.  A note from Général Grégoire states that Robert would be much missed by the General Staff of his Division.

Has been with the Division for a month, was greatly appreciated at the time of the survey of the English troops.  Does not confine himself to his duties as an interpreter, but fulfils the role of a real staff officer.  Very active, participates in field reconnaissance and can report useful information to the command.

The 133rd Division spent the remainder of 1917 occupying areas of Belgium and helping with the organisation of the conquered positions from the Battle of Passchendaele.

The year 1918 bought intensive front line action for La Gauloise.  Between 21 March and 3 April the Division formed part of the Anglo-French defence against Operation Michael, the German Spring Offensive.  Robert’s efforts were once again recognised by his commanding officer, this time for ensuring cooperation between the British and the French units under difficult circumstances at Moreuil.  Almost immediately after this offensive, the Division was engaged in the Battle of the Lys, or the Fourth Battle of Ypres, fighting at Méteren on 16 April.  Scarcely four months later the Division was engaged in the Third Battle of Picardy, where Robert was praised as an ‘Officer of great merit’ for his actions during the 9 and 21 August at Beuvraignes.  In September and October the Division was engaged in efforts pushing towards the Hindenburg position and violent fighting in the Saint-Quentin region.

Robert was officially demobbed on 21 January 1919.  During his service he had been awarded the Croix de Guerre with two citations: one bronze star (mentioned at regiment or brigade level) and one bronze palm (cited at army level.)  In February 1919 Général Valentin wrote to inform Robert that he had been recommended for further recognition.  He was named Chevalier de la légion d'honneur by decree of 12 July 1919, on the report of the Minister of War.  A photograph taken at Les Invalides, possibly to receive the légion d’honneur, captures Robert in uniform with his Croix de Guerre proudly on display.

For Robert, life after the Armistice resumed its pre-war pattern of business, fatherhood, patron of the arts, and polo player.  Forced to leave France for the USA during the Second World War, Robert died in Switzerland on 25 December 1946.  His Croix de Guerre, a testament to his war service, was gifted to The Rothschild Archive by his grandson in 2012.

During November, the New Court War memorial will be on display in the main reception, New Court. Read more about the war memorial and the names of the fallen here » 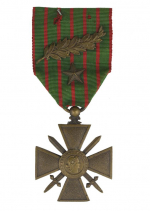 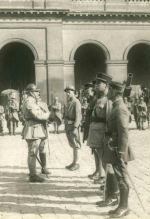