From their roots in the Judengasse in Frankfurt, The Rothschild family were imbued with a strong sense of the tradition of Zedaka, which places expectations on members of the community to work for social justice by offering material support for those in need. The education, encouragement and support of young people has been a core strand of Rothschild philanthropic activity for over 200 years.

Nathan Mayer Rothschild (1777-1836) and his wife Hannah (1783-1850), were early benefactors of The Jews' Free School, which had been established in Bell Lane, Spitalfields in 1817 to provide basic education to the poor Jewish community in London's East End. Hannah established an accumulating fund for the permanent endowment of the school in memory of her husband. The fund provided a new outfit of clothing for every pupil each year.

In Frankfurt, The Adelheid Carl von Rothschild Foundation for Bequests for Jewish Schoolgirls was established in 1854 by Carl Mayer von Rothschild (1788-1855) in memory of his wife Adelheid (1800-1853). The aim of the Foundation was to pay for the school fees of between 100 and 180 needy Jewish girls every year. In Vienna, the Oscar von Rothschild Foundation for school fees for day boys to the Gymnasium of the k.k. Theresianische Akademie was established in 1910 by Albert (1844-1911) after the death of his son, Oscar (1888-1909).

In March 1915, Nathaniel Mayer (‘Natty’), 1st Lord Rothschild (1840-1915) received this thank-you letter from Robert Baden Powell, concerning a donation he had made to the Endowment Fund of the Boy Scout Movement.

Lieutenant General Robert Stephenson Smyth Baden Powell, 1st Baron Baden Powell (1857-1941) was a British Army officer, author of Scouting for Boys and founder and first Chief Scout of The Boy Scouts Association and founder of the Girl Guides. After having been educated at Charterhouse School in Surrey, Baden Powell served in the British Army from 1876 until 1910 in India and Africa. In 1899, during the Second Boer War in South Africa, Baden Powell successfully defended the town in the Siege of Mafeking.

On his return from Africa in 1903, he found that his military training manual, Aids to Scouting, had become a best-seller, and was being used by teachers and youth organisations. Following his involvement in the Boys' Brigade as Brigade Secretary and Officer in charge of its scouting section, with encouragement from his friend, William Alexander Smith, Baden Powell decided to re-write Aids to Scouting to suit a youth readership. In 1907, he held a camp on Brownsea Island, in Poole, Dorset to try out his ideas, bringing together 20 boys from a variety of backgrounds. Based on the success of this camp, and his earlier books, he wrote Scouting for Boys, published in 1908. In 1910 Baden Powell retired from the army and formed The Boy Scouts Association. The first Scout Rally was held at The Crystal Palace in 1909, at which appeared a number of girls dressed in Scout uniform, who told Baden Powell that they were the ‘Girl Scouts’, following which, in 1910, Baden Powell and his sister Agnes formed the Girl Guides from which the Girl Guides Movement grew. In its first census in 1910, Scouting had almost 108,000 participants; over 100,000 were young people. In 1912 Baden Powell married Olave St Clair Soames. He continued to advise the movement he founded until his retirement in 1937.

May I trouble you with just one line to say how very grateful I am for your generous donation to the Endowment Fund of the Boy Scout Movement. It will be a great help to us particularly in persuading others to come forward in a similarly generous spirit.

I can assure you that the money will be well expended in a big and promising endeavour to prevent in the future generation much of the inefficiency and waste of human material that is going on at present.

We have a very considerable number of Jewish boys in our organisation now, and we hope to be able to do a great deal of good for them in the poorer districts of London, Glasgow (where we have a fine lot of them), and other manufacturing centres.

This fund, if we can only raise it will set us on a sound financial basis for doing a really big national work in that direction – but £250,000 [nearly £18.5 million today] will take a lot of raising!!

I was greatly interested to hear that you have a Boy Scout in your own family, in your grandson, Master Behrens. I hope it will do him great good.

With renewed thanks – Believe me,

The Boy Scout Movement was a cause which Natty would undoubtedly have approved. He was well aware of the social problems in London’s East End, having founded the Four Percent Industrial Dwellings Company in 1885 to provide better housing. His grandson John Nathaniel Behrens (1903-1935) was a Boy Scout. Natty’s brother Leopold (1845-1917) was acquainted with Baden Powell, having supported the Boer War effort in 1899 and been kept informed of the campaign when Baden Powell had commanded the troops at Mafeking. Sadly Natty died three weeks after this letter was written, on 31 March, and the horrific war that was in its infancy in 1915 was to cut a swathe through a generation. Baden Powell retried to Nyeri, Kenya, where he died in 1941. 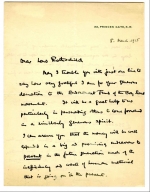 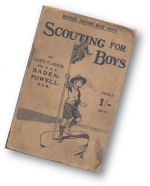