October 2020 is a month that the Archivists have eagerly been anticipating as we await the reopening of the Jewish Museum Frankfurt. After being closed for nearly six years, the museum is due to reopen on 21 October*, after a major building extension, complete interior renovation and reinterpretation of the galleries, achieved with financial support from the city and donors including the Rothschild family. We look here in detail at one of the items that has been lent from the collections of The Rothschild Archive, London.

The Rothschilds in Frankfurt

The Rothschild family have been part of Frankfurt’s Jewish community since at least 1450. Successive generations had been born in the Judengasse, the city’s Jewish quarter, including Mayer Amschel Rothschild (1744-1812) who we often refer to as the founder of the Rothschild businesses. As a boy, Mayer Amschel was sent from Frankfurt to learn his trade in finance with Simon Wolf Oppenheimer in Hannover, but he returned to Frankfurt, and the family's roots. An extraordinary entrepreneur, Mayer Amschel amassed a not inconsiderable fortune and, in 1810, renamed his firm M A Rothschild und Söhne, establishing a partnership with his sons in Frankfurt. Whilst Mayer Amschel’s widow Gutle (1753-1849) was alive, the family returned to the Judengasse for all important matters. For those who had ventured further afield, their acknowledgment of their ancestral home was clear in their business principles and philanthropic endeavours.

The Jewish Museum Frankfurt is the oldest independent Jewish Museum in Germany. It was opened by Federal Chancellor Helmut Kohl on 9 November 1988, the 50th anniversary of Kristallnacht. The careful choice of a home for a permanent museum telling the story of its century’s old Jewish community, had been decided upon democratically by the City; it was to be the former Rothschild Palais.  Situated on the bank of the river Main, the Rothschild Palais at 15 Untermainkai had originally been designed in 1821 by Frankfurt's master builder, Johann C F Hess as a luxurious residence for the banker Joseph Isaak Speyer. When one of Mayer Amschel’s sons, Carl von Rothschild (1788-1855), bought the property in 1846 he commissioned the architect Friedrich Rumpf to make alterations. The family continued to spend much of their time at the house, and it passed from Carl to his son Mayer Carl (1820-1886) who lived there with his wife Louise and their seven daughters. In 1894 Hannah Louisa, one of the seven daughters, established the Baron Carl von Rothschild public library in the house in memory of her father and grandfather. The Rothschild business in Frankfurt closed in 1901 but family members continued to live in the city of their ancestors.  The Rothschild Palais was acquired by the city of Frankfurt in 1928. After the Second World War it served as the main site of the municipal and university library, and later as an outpost of the Historical Museum.  In the 1960s the rooms were rebuilt and refurnished to be used as an annexe to Frankfurt's Historical Museum.

The Museum is reborn

Today, after its renovation, the Rothschild Palais stands alongside a new and modern facility which will incorporate a library, event space and café for visitors. The rooms once occupied by the Rothschild family are now shared with other prominent Frankfurt families, between them telling the story of Frankfurt’s Jewish community from 1800 to present day.  Having been approached early on in the development of the concept for the museum’s new permanent galleries, the Archivists worked closely with the Museum’s curators on how to present the Rothschild story. The Rothschild Archive has selected items from its collection which have been loaned for display in the new exhibition space for the next ten years. Having mostly been kept in our archive store, where only a handful of people have occasionally passed them by, they are off to start a new chapter and will no doubt captivate their next audience.

One item which has been lent from the collection at New Court is a beautiful portrait of Louise, Baroness Mayer Carl von Rothschild (1820-1894) and her daughter Adele (1843-1922).  This piece is particularly poignant, because in a sense Louise is ‘coming home’: the youngest child of Nathan Mayer Rothschild (1777-1836) of the London house married her Frankfurt cousin Mayer Carl in 1842 and set up home with him at 15 Untermainkai, the site of the Jewish Museum today. At least three versions of this portrait by a favoured artist of the family survive. Louise and her daughters, like other members of the family, left their mark on Frankfurt through the many charitable enterprises that they established.  These include the Günthersburg Park, the Carolinum dental hospital, now part of the university, and the Clementine Children’s Hospital which was established by Louise after the early death of her daughter in whose memory it is named.

The portraits were commissioned to be circulated among family members. The interior of the room in which they are portrayed is almost as sumptuous as the material of Louise’s dress. Louise and her daughter are in front of an elaborate fireplace, and part of her husband’s magnificent collection of Schatzkammer (literally 'Treasure Room') is displayed. Mayer Carl was a discerning collector and by the time he died his art collection was so vast it took up the entire Rothschild Palais. During Mayer Carl's lifetime the collection was on display to the general public every Sunday. One can only imagine what it would have been like to step into those rooms and wonder at the precious pieces on display.  Indeed, that wonder can be experienced again with the reopening of the museum as some of the original Rothschild interiors having been retained and restored for visitors to walk through once more. Frankfurt is at the top of the Archivists’ list of places to visit; we hope you will too. 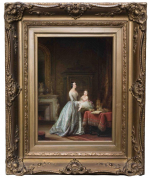