The Rothschilds were dedicated collectors, and vied among themselves to develop the most spectacular collections. The great Rothschild houses were perfect settings for art, silverware, and porcelain. Some of the most priceless and stunning collections were of jewels and jewellery.

Adelheid von Rothschild (1853-1935) was one of the daughters of Wilhelm Carl von Rothschild (1828-1901) and Hannah Mathilde von Rothschild (1832-1924). Born into the Frankfurt branch of the family, she married her French cousin Edmond James de Rothschild (1845-1934) in 1877 and they had three children. From the 1880s she became involved in her husband's life work in Palestine, where Edmond oversaw the creation of dozens of new colonies for Jewish settlers.

Throughout her life, she was a keen collector of lace, costumes and accessories. In Paris, she lived at 41 rue de Faubourg Saint-Honoré. Although relatively narrow, the rue de Faubourg was, and is still today, one of the most luxurious and fashionable streets in the world, home of many couture and fashion houses, art galleries, and at No.55, the Élysée Palace, the official residence of the French President.  Adelheid lived a short distance from the jeweller, Maurice Tripier at No.28; from 1880, No.24 was the retail shop of the luxury goods manufacturer, Hermès, and from 1924, No.13 was occupied by Fabergé Paris.

This collection of designs, recently acquired by The Rothschild Archive, consists of a pen and watercolour design for a diamond and turquoise bracelet signed "Maurice Tripier 28 Faubg St Honoré", and with the client’s name "Madame la Baronnne A de Rothschild". It notes details about the stone count and size, as well as the fastener. There are several designs for watchstrap or bracelet clasps in a ‘moderne’ style; a design for a medallion with "Bonheur"(‘happiness’) to the face, "Prospérité" (prosperity) to the reverse, in pen and ink, pencil and yellow crayon, stamped “Maurice Tripier, 28 Faubg St-Honoré Paris", and a design for a ring in pen and ink with white watercolour highlights,  noted "20.000  6 Petit brillants". It is not known if these items were commissioned for Adelheid herself, or as gifts.

The ‘style moderne’,  or Art Deco as it became to be known, was a movement in the decorative arts and architecture that originated in the 1920s and developed into a major style in western Europe and the United States during the 1930s. Its name was derived from the ‘Exposition Internationale des Arts Décoratifs et Industriels Modernes’, held in Paris in 1925, where the style was first exhibited. Art Deco design represented modernism turned into fashion. Its products included both individually crafted luxury items and mass-produced items, but, in either case, the intention was to create a sleek elegance that symbolised wealth and sophistication, and the distinguishing features of the style were simple, clean shapes, often with a ‘streamlined’ look and ornament that was geometric or stylised from representational forms.

The collections of the Viennese Rothschilds

The Viennese family were also discerning collectors of jewellery. Alphonse Mayer (1878-1942) and his wife Clarice (1894-1967) accumulated one of Europe’s greatest art collections, including many fabulous pieces of jewellery. Alphonse’s great passion was philately, and in March 1938, he and Clarice travelled to London to visit an exhibition to which he had loaned several important stamps. As they were travelling, however, Hitler’s army seized the family property during the Anschluss, when the Third Reich annexed Austria to Nazi Germany. The Nazis arrested Alphonse’s brother, Louis (1882-1955), as he attempted to flee Vienna, and then began to ‘negotiate’ with the family to trade the bank and all other properties and assets, including the collections - in return for Louis’s life. After the war, Clarice, and her daughter Bettina Looram (née von Rothschild) returned to Austria to see what could be recovered. It was not until the late 1990s that the Viennese Rothschild heirs began receiving works of art that they had been forced to give up during and immediately after the war. Many of these restituted pieces were later sold at auction in 1999, fetching an astounding £57.5 million.

In 2015, pieces that remained from the original collections of Alphonse and Clarice were gifted to the Museum of Fine Arts, Boston by Mrs Bettina Burr, Mrs Looram’s heir, a gift valued in the millions. The gift included a beautiful Art Deco platinum, white gold, emerald and diamond clip-brooch that Alphonse had given to Clarice on their twenty-fifth wedding anniversary in 1937. The jewellery in the Museum of Fine Arts gift never fell into Nazi hands, Mrs Burr explained, because her grandmother had worn it to England. 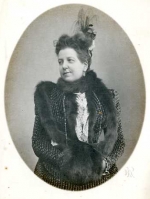