This month we look back to sunny climes in the South of France, with a report from The Graphic, 1892.

"The Season in the South of France – Some Villas at Cannes"

Cannes, a resort town on the French Riviera, is today famed for its international film festival, the Boulevard de la Croisette which curves along the coast lined with sandy beaches, upmarket boutiques and palatial hotels.  Long frequented by the English and Russians, Cannes was first discovered by French high society in the 1870s.  Blessed with a Mediterranean climate, the city enjoys around 11 hours of sunshine per day during summer, while in winter the weather remains mild with relatively low rainfall.  It was this congenial atmosphere that attracted Betty, Baroness James de Rothschild (1805-1886), to spend the winter months in Cannes, constructing the Villa Rothschild in a residential neighbourhood known as the Quartier des Anglais.

Betty de Rothschild was an extraordinary woman.  Born Betty von Rothschild in Frankfurt on 15 June 1805, she was the daughter of Salomon von Rothschild (1774-1855) founder of the Viennese house of Rothschild, and his wife Caroline (née Stern).  Betty, their only daughter, was educated in Vienna.  Aged 19 she married her uncle James de Rothschild (1792-1868) on 11 July 1824 and went to Paris to rule over one of the most elegant salons in the city.  Her guests included politicians, painters, artists, musicians, even royalty.  She became a close friend of the French queen, Marie-Amélie, sat for Ingres, and was a patron of Chopin.  Betty and James raised five children, a daughter and four sons, whom she prepared to assume leading roles in business, society and the Jewish community.  She was also devoted to her philanthropic activities; in Cannes as in Paris a number of foundations and institutions bore testimony to her patronage.

In her widowhood, Betty bought the land in Cannes on which to build a villa from Mme Pesron for FF360,000 in 1881, acquiring more parcels of land over the next two years.  It was the first time a member of the Rothschild family had chosen a site on the southern French coast.  She commissioned a local architect Charles Baron to build the house in 1882.  Amongst the papers of The Rothschild Archive are letters written by Betty relating to the building works, and accounts of her purchases of furniture and expenditure of the garden at her new villa. [i]

“The house plan of the new Villa Rothschild was rectangular, rising five stories.  The basement contained kitchens, laundry, and store rooms.  The ground floor contained reception rooms.  Bedrooms and private sitting rooms were on the next two levels.  Servant quarters were in the attic.  Graceful twin staircases led down to the gardens, which were planted with numerous exotic plant species.  There were several fountains and displays of running water...” [ii]

The resulting classical villa was similar in spirit to Betty’s other properties; the châteaux at Boulogne and Ferrières.  The park at Cannes was in fact modelled on that of Ferrières and was the setting for frequent receptions for neighbours (including Henry de Brougham, the Duchesse de Vallombrosa, Sir Charles Murray, and the Princesse de Sagan), relatives and acquaintances.  Soon every notable person travelling to Cannes was invited to the Villa Rothschild.

In 1892 The Graphic, a British weekly illustrated newspaper, included the Villa Rothschild in its illustrations of ‘Villas at Cannes’.  It published a photograph of the Villa Rothschild alongside an artist’s impressions of other Villas of note in the neighbourhood.  The Graphic, in print between 1869 and 1932, recruited gifted artists including Luke Fildes, Hubert von Herkomer, and John Millais to work on its illustrations.  Published on a Saturday for sixpence, The Graphic was for a time enormously successful.  In addition to its home market the paper had subscribers all around the British Empire and North America.  It covered home news and news from around the Empire, and devoted much attention to literature, arts, sciences, the fashionable world, sport, music and opera.  Royal occasions and national celebrations and ceremonials were also given prominent coverage.  A glance of the Villa Rothschild in Cannes for the readers of The Graphic must have been a thrill; one could just imagine being at the beautiful house situated among the exotic gardens, overlooking the Mediterranean Sea whilst being bathed in sunlight.  Betty had certainly chosen an enviable spot!

Betty spent the last years of her life at the villa, and left it at her death to her eldest son, Alphonse (1827-1905).  In time, it passed to Alphonse’s son Edouard (1868-1949), and here he and his young family regularly spent some weeks at the end of the winter, later adding a few weeks in the summer to holiday there.  During the Second World War, the building was seized by the city and was afterwards sold to the town of Cannes, today housing part of the city’s library.  Home to the The Noailles Media Library, the Villa Rothschild has been listed as an official historical monument since 1991.  With over 250,000 documents (books, periodicals, records, videocassettes, etc.) the Villa is open to the public for research and hosts many cultural events.[iii]  Perhaps a destination to add to next years’ travel list?

[i] RAL 000/929 OE 424, Betty, Baroness James de Rothschild. Correspondence, 1877-1889. Correspondence, mostly from Cannes of miscellaneous subject matter: letters relating to building works on estates; letters from Betty in her own handwriting; letters and papers relating to Betty’s involvement in various charities, including annual subscriptions to the work of the free schools in Lagny. RAL 000/929 OB 23 Rothschild Family. Volume of Accounts Current (I/59/12C) 1882. Betty, Baroness James: purchases of furniture, and expenditure on the garden at the villa in Cannes.

The Villa Rothschild at Cannes 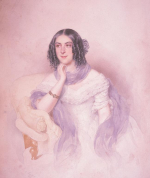