Sometimes it is the smallest of objects that can have the greatest significance. In the collections of the Archive is a small, rather tired-looking Union Jack desk flag, about 25 cm high. This flag, originally one of a set of five, once played a crucial role in the business of one of earth’s most precious traded commodities – gold. September 2019 marks the centenary of the Gold Fixing, which for over 80 years took place at New Court, with the London firm of N M Rothschild & Sons at the heart of proceedings.

Origins of the London Gold Market

The first gold rush of 1697 brought gold from Brazil into London, partly transported on ships owned by the East India Company. This inflow of gold led to demand for a purpose-built London vault, which the Bank of England established, and The Bank played a key role in being a custodian, regulator and facilitator of lending and selling of gold by other banks. In 1750 The Bank of England set up the London Good Delivery List, which formally recognised those refineries who produced gold bars of a certain standard and could therefore be allowed to enter the London market.

In 1848 a Royal Commission charged with examining the efficiency of the British Royal Mint recommended the separation of the twin roles of refining and coin striking. In 1852, Anthony de Rothschild (1810-1876), the second son of Nathan Mayer Rothschild had acquired the lease of the the Royal Mint Refinery in London’s east end. The Royal Mint Refinery played a leading role in refining the world’s gold output and the acquisition was particularly timely as new discoveries of Californian and Australian gold brought a flood of new supplies of gold to London in the 1850s. By 1850, the five companies - N M Rothschild & Sons, Mocatta & Goldsmid, Pixley & Abell, Samuel Montagu & Co. and Sharps Wilkins - that 150 years later would form the London Gold Market Fixing Company, were flourishing. The term 'London Gold Market' refers to these five companies who came together to oversee the operation of the gold market in London.

For more than 80 years, the offices of N M Rothschild & Sons in St Swithin’s Lane, close to the Bank of England, provided the setting for a twice daily ritual which, though conducted behind closed doors in a small room and with few players, had an impact across the world: the Gold Fixing. The daily Gold Fixing emerged in the wake of the First World War as a means of restoring systematic valuation to the gold market after the uncertainties of the wartime years. At the beginning of the War, many countries had suspended gold payments and the Gold Standard collapsed as central banks began to switch their reserves into currencies that could be exchanged for gold. As the War ended, the restoration of London to its pre-War position as the international market place for gold was seen as crucial to the City.

The choice of N M Rothschild & Sons to host this operation reflected a century of close association in bullion matters between the business and the Bank of England; the London Rothschilds had been dealing in bullion with Threadneedle Street since 1824, Nathan Rothschild and his brothers having already established an international reputation for their bullion and specie operations during the Napoleonic War. In 1825 the Rothschild brothers had undertaken a major operation to shore up the Bank’s bullion reserves during a potentially catastrophic run on the Bank. In 1919 Rothschild was in a pivotal position in the London gold market.

The system arrived at was for N M Rothschild & Sons to advance £3.17s.9d. an ounce to the producers on receipt of the refined gold and then to auction it to achieve the best possible price, with the brokers bidding at the Fixing.  The premium was pooled and forwarded to the producers every six months. The first Gold Fixing took place on 12 September 1919 and achieved a price of £4.18s.9d. per ounce.  Bids were made by telephone during those first few days, but this proved inconvenient and it was quickly decided to hold a regular formal meeting each day at 11am at New Court.

Agreeing a ‘Fix’: lowering the flags

The Gold Fixing was co-ordinated by the Treasury Department of N M Rothschild & Sons. The representatives of the five members of the London Gold Market assembled in a small panelled room, watched over by the portraits of crowned heads of Europe, former clients of Nathan Rothschild . Each representative sat at a small desk equipped with a telephone and a small flag, the Union Jack. At the centre sat the Chairman of the Fixing, traditionally the representative of N M Rothschild & Sons. To begin proceedings, the Chairman announced an opening price which was reported back, by telephone, to the dealing room of each of the houses represented at the Fixing.  They in turn relayed the price to their customers around the world.  On the basis of orders received, each dealing room instructed its representative at the Fixing to declare as a buyer or seller of a certain number of bars.  If a balance of buyers and sellers was achieved within the room the price is fixed; if not the process was repeated at a higher or lower price until a balance was achieved.  At that moment the Chairman declared the price ‘fixed’. At any stage, customers could be advised by telephone of price changes and could alter their instructions.  While these discussions were going on, the representative raised his flag to indicate unreadiness to settle. Only when all the flags were lowered on the table and the balance was achieved could the Chairman declare a ‘Fix’.

The Gold Fixing in the twentieth century

With the outbreak of the war on 3 September 1939, the London Gold Market closed. The Gold Fixing procedure was not to be resumed until 22 March 1954 after a gap of almost 15 years. In 1968, when the Tet offensive in Vietnam triggered a tidal wave of buying, the authorities closed the London Gold Market for two weeks, following the unprecedented three-day speculative surge of gold buying.  When it re-opened on 1 April, it fixed the price in dollars, not sterling, with the gold price no longer set but free to float.  At the same time, the step was taken of moving to a twice-daily price-fixing, at 10.30am and 3pm.On 21 January 1980 a price of $850 per ounce was reached during the Gold Fixing, an all-time high over the entire history of the Fixing.  A combination of political crisis in the Middle East, high oil prices and inflation, prompting strong physical and speculative buying, underlay this record.

N M Rothschild & Sons, the sole remaining original member of the London Gold Market decided to withdraw from the Gold Fixing in 2004;  the last Fixing in which the London Rothschild business participated took place in the ‘Gold Fixing Room’ at New Court on 4 May 2004. The ‘Gold Fixing Room’ is itself now history, with redevelopment of New Court that began in 2008. The Gold Fixing still takes place today in the virtual environment, but for 85 years, the well-tried procedures, conducted over 15,000 times in the small room in St Swithin’s Lane, provided the daily benchmark against which a great deal of the world’s physical gold business was transactd. 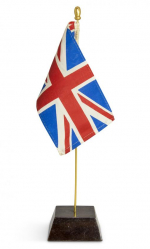 Desk flag from the Gold Fixing Room at New Court