St Amant: a horse of character

St. Amant (1901–1920) was a British thoroughbred racehorse and sire, taking his name from "St Amand", a French sixth century missionary, who was father of monasticism in ancient Belgium.

In a career that lasted from 1903 to 1906 he ran twenty-one times and won six races. St. Amant was bred by his owner, Leopold de Rothschild (1845-1917), at his Southcourt Stud at Leighton Buzzard in Bedfordshire. St. Amant was trained for most his career by Alfred Hayhoe at Palace House, Newmarket, Suffolk.

A famous victory: the Epsom Derby of 1904

The Epsom Derby of 1904 was run on Wednesday 1st June. There were eight runners from an initial entry of 26. The bookmakers offered St.Amant at 5/1 and he went into the race as joint-favourite with Henry The First. St. Amant was ridden by Kempton Cannon, in front of a crowd which included the King and the Prince of Wales. The race was run in a violent thunderstorm, which appeared to adversely affect some of the runners but St. Amant broke quickly, opened up a clear lead, and was never headed. He won in a canter by three lengths from John O'Gaunt, with St Denis six lengths further back in third, in a time of 2 mins 45.4 seconds.

The finish of the race was greeted by deafening cheers from the crowd; the enthusiastic reception largely due to the popularity of Leopold. The winner won a first prize of £6,500, the equivalent of £2.3 million today. As part of the celebrations Rothschild distributed coal, groceries and money to the widows of Newmarket, and gave half a crown to every schoolchild in the neighbourhood.

On 7 September 1904, St. Amant attempted to become the second successive Triple Crown winner in the St Leger. St. Amant was sent to the front after two furlongs in an attempt to repeat the tactics employed at Epsom, but soon after half way he "began to sulk" and dropped back, eventually tailing off, last of the six runners. He ran in a further six races before the end of the season, at least five of them at Newmarket, but failed to win. During this period he was described as "a vicious, ill-tempered brute" who had to be fitted with a muzzle during exercise. At the end of the season St. Amant was sent to be exercised over hurdles at the stables of Tom Cannon Jr at Chattis Hill in Hampshire, in an attempt to "restore his courage".

In 1905 St Amant was entered, but failed to appear, in the Lincolnshire Handicap, Ascot Gold Cup and Princess of Wales's Stakes. During the season, Leopold de Rothschild received and declined an offer for St. Amant from the Russian government. St Amant finally appeared at Newmarket on October 5 in the Jockey Club Stakes over fourteen furlongs. He started a complete outsider for the race, which with £10,000 in prize money, was one of the most valuable of the season, but returned to his best to win by three quarters of a length from Polymelus.

St. Amant's 'resurrection' in 1905 was partly attributed to a cat which had become his constant companion and apparently soothed his temperament.

In 1906 St Amant had a disappointing year. As a stud, St. Amant was not a particularly successful stallion. The best of his offspring was the filly Chacolet, who was bred in England but became a champion racehorse in the United States in the early 1920s. 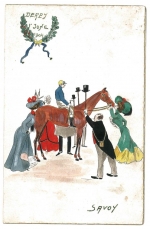