As many of us plan our summer holidays, we look back to May 1925, when Mr Samuel Stephany, General Manager, N M Rothschild & Sons was sent to Spain by the Rothschild partners on company business.

The General Manger was a position of seniority and responsibility, and Samuel Stephany (affectionately known as ‘Steph’ and whose surname was pronounced to rhyme with ‘rainy’) was with the firm for many years. During the First World War he was the Secretary of the Jewish War Services Committee established at New Court by Lionel de Rothschild to help promote the enlistment of Jewish soldiers. Ronald Palin, a clerk who joined the firm in 1925 recalled:

“I was situated in a corner of the General Office [at New Court] close to the General Manager’s desk and watchful eye…Samuel Stephany…sat on a high chair and at a high sloping desk”. Recalling a business trip to New York in 1930, he described Mr Stephany as “about fifty, a short rather plump man, strikingly Jewish in appearance, who hid a kindly disposition beneath a well-fitting mask of business-like efficiency and devotion to duty….his single-minded concentration on business was notorious.”

In 1925, Mr Stephany was required to go to Madrid. A company memo in the Special Subject  Correspondence files of the bank reveals that he was asked to report on the currency markets, and find out if the Spanish banks needed dollars or sterling. He was to investigate the borrowing of pesetas and buy pesetas, and was instructed “to borrow pesetas for two months against any currency” – the bank was willing to pay up to 5½% per annum for pesetas for two months. He was also to report on shipments of grain. His invoices reveal that he stayed for three days at the Hotel Ritz-Madrid, an elegant baroque hotel in the heart of city; however his stay at the company expense was not extravagant – his hotel bill shows he only drank mineral water during his stay. During his long career, Mr Stephany was sent on business trips across Europe, and in the 1930s, further afield to New York and Brazil.

Ronald Palin joined N M Rothschild & Sons in 1925, eventually rising to the position of Secretary of the Bank, retiring in 1968. In 1970, he recalled the colourful personalities and events that shaped his 45 years with the Bank in Rothschild Relish (Cassell: London, 1970). This charming book, though out of print, can still easily be found. It is an affectionate portrait of the unique world of New Court and its many idiosyncracies:

“What I had expected to find when I went to New Court straight from school, I don't know. I had no standards of comparison and no knowledge whatever of banking or commerce… I could not have anticipated that I would find an organization which on the one hand was obviously efficient, successful and profitable yet which on the other appeared to be managed largely by amiable eccentrics who did very little work and that without much seriousness and by antiquated methods. There was an explanation, of course, but I discovered it only gradually and not until later.”

Samuel Stephany at his desk at New Court c.1933 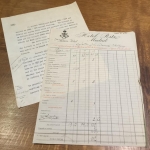 Memo with Mr Stephany's instructions and his hotel bill