Lease and Parliamentary papers to operate the Royal Mint Refinery, 1852

Nathan Mayer Rothschild (1777-1836) first began to deal in bullion in 1809. In 1815, the Rothschild brothers famously supplied gold to the Duke of Wellington to enable the payment of the troops in Belgium in the days leading up to the Battle of Waterloo. In late 1825, the Rothschilds averted a financial crisis by supplying a large volume of gold to the Bank of England.

The Rothschilds’ interests in refining can be traced to 1827, when James de Rothschild (1792-1868) began operating his own refinery in Paris. In 1848 a Royal Commission charged with examining the efficiency of the British Royal Mint recommended the separation of the twin roles of refining and coin striking. A recommendation of the Commission was that a refinery be leased to an external agency of the Royal Mint. The opportunity to manage a refinery in England was enthusiastically seized by Anthony de Rothschild (1810-1876), the second son of Nathan. On 26 January 1852 he wrote from New Court to the Deputy Master of the Mint:

“I request you will have the goodness to inform the Master of the Mint that I am ready to execute the Lease for the Refinery, and I should be obliged to you to let me know when you receive the confirmation of the Chancellor of the Exchequer to the conditions of the Lease, in order that the documents relative to it may be completed.”

On 3 February the lease of the buildings and equipment was sanctioned by Her Majesty’s Treasury and the Royal Mint Refinery became part of the London business’s interests. The family retained the lease on the Royal Mint Refinery for well over a century. The Royal Mint Refinery played a leading role in refining the world’s gold output and the acquisition was particularly timely as new discoveries of Californian and Australian gold brought a flood of new supplies of gold to London in the 1850s. Gold bars refined by Rothschild and stamped with the Rothschild name remain very popular among collectors.

Read more about the history of the Royal Mint Refinery here »

RAL reference: RAL 000/2056:  Parliamentary papers relating to N M Rothschild & Sons leasing of the Royal M int Refinery: a copy of a letter from the Master of the Treasury inclosing [sic] a copy of the terms upon which it is proposed to grant a lease of the Refinery at the Mint to Sir Anthony de Rothschild, together with the terms in question; and copy of the Treasury minute of the 3rd day of February 1852, sanctioning the arrangement. 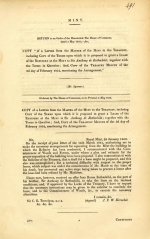