The wedding of Leopold and Marie in 1881 caused a great stir in the international press, not the least because of the presence of the Prince of Wales at his first Jewish ceremony. The groom was one of London's most eligible bachelors and the bride a beautiful 18-year-old from Trieste, whose sister, Louise, was already well known in London as the wife of Arthur Sassoon, confidant of the Prince of Wales. Among the detailed newspaper reports itemising the gifts presented by the guests are two small entries that are of particular interest ot the staff at The Rothschild Archive, for they reveal the existence, recorded nowhere else, of "lady clerks" from New Court, the London bank.

The Rothschild Archive holds a small collection of items gathered together by one of the clerks at the time, Mr Burge, whose son also worked at New Court and who presented the items relating to the wedding to the Archive in 1995. It is not unusual to find that several generations of one family have worked for the Rothschilds. The wedding ephemera includes a silk purse, an invitation to view the gifts (at the home of Alfred, the groom's brother, at 1 Seamore Place), a menu card for dinner and a programme of music.

Documents and souvenirs of of the wedding 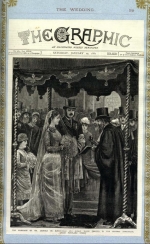