Face of the founder

Among the many unusual objects in the collection is a death mask taken of Nathan Mayer Rothschild (1777-1836). Nathan Mayer Rothschild was born in Frankfurt at the house of the Hinterpfann on 16 September 1777. He died in that city on 28 July 1836. In the intervening 59 years, Nathan led his brothers to the pinnacle of the financial world.

Nathan almost burst out of Frankfurt to settle in England in 1798, initially as a textile merchant in Manchester. His marriage in 1806 to Hannah, daughter of Levi Barent Cohen, gave him a position in society and easy access to an enviable range of business contacts. Building on this foundation and Nathan was credited by his brothers with securing for them the best opportunities to achieve their position in the world of finance.

Nathan was a popular 'Manchester man', an indulgent father, a respectful husband, an admired (if occasionally feared) brother. He was a larger than life figure on the London exchanges, giving himself totally to his business, permitting no half measures. His brusqueness and off-handedness were legendary.

Nathan's London House, N M Rothschild, dealt in bullion and foreign exchange, and his remarkable successes in these fields earned him the contract from the British Government to supply Wellington's troops with gold coin in 1814 and 1815, leading up to the Battle of Waterloo. He issued 26 British and foreign government loans between 1818 and 1835 and in 1824 floated the Alliance Assurance Company.

Moving to New Court, St Swithin's Lane in London in 1809, Nathan initially raised his family there too, but by 1816 had found a villa at Stamford Hill to provide more space and better air. In 1825, the family's town home was established at 107, Piccadilly and in 1835, Nathan took on Gunnersbury Park in west London.

The death of Nathan

In June 1836, Nathan's son and heir, twenty-eight-year-old Lionel, married his cousin Charlotte, only daughter of Carl von Rothschild of Naples. The wedding took place in Frankfurt to please Nathan’s mother, 83-year old Gutle. Nathan was reported unwell on the day of the wedding; and later took to his bed. By the middle of July he was no better, running a high temperature, and he succumbed on the 28th July, probably from septicaemia caused by an infected abcess.

On the day of Nathan's death, 28 July, carrier pigeons were released to fly to Rothschild houses all over Europe to prevent unnecessary losses. Apparently only one pigeon reached the English coast and was inadvertently shot by a farmer who was puzzled by the message the bird was carrying: 'II est mort.' Nathan's body reached London by boat; and the funeral procession took place on 8 August with the Lord Mayor, sheriffs, aldermen, ambassadors and ministers following the coffin.

"The death of Nathan Mayer Rothschild is one of the most important events for the City, and perhaps for Europe, which has occurred for a very long time. His financial transactions have pervaded the whole of the Continent, and…influenced money business of every description. No operations on an equally large scale existed in Europe previous to his time…Mr. Rothschild, like the rest of his brothers, held a patent of nobility with the title of Baron, but' he never assumed it and was more justly proud of that name under which he had acquired a distinction which no title could convey ..." The Times, 4 August 1836 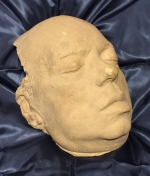 Elegy on the death of Nathan Mayer Rothschild