Phrenology (from the Greek for "mind"; and "knowledge") is a science primarily focused on measurements of the human skull, based on the concept that the brain is the organ of the mind, and that certain brain areas have specific functions that can be linked to particular character traits. Developed by German physician Franz Joseph Gall in 1796, the principal British centre for phrenology was Edinburgh, where the Edinburgh Phrenological Society was established in 1820. Phrenological thinking was influential in 19th-century psychiatry.

Although early French writings on phrenology had been used for anti-semitic propaganda against James de Rothschild (1792-1868) in Paris, by the mid-19th century the science had gained popularity in England. Members of the English Rothschild family, favouring the fashions of the day, put themselves forward for phrenlogical examinations. In 1849, Lady Louise de Rothschild (1821-1910), wife of Nathan’s son Sir Anthony de Rothschild (1810-1876) and her young daughters Constance (1843-1931) and Annie (1844-1926) visited a Dr Marriatt, who conducted phrenological assessments, and wrote a short report on each of them.

Dr Marriatt believed that the human mind had a set of various mental faculties, each one represented in a different area of the brain, as indicated on the chart on the right. These areas were said to be proportional to a person's propensities. It was believed that the skull accommodates to the different sizes of these areas of the brain, so that a person's capacity for a given personality trait could be determined simply by measuring the area of the skull that overlay the corresponding area of the brain.

Constance was found to be affectionate, cheerful, imaginative and fond of poetry, according to the test carried out by Mr Marriatt. 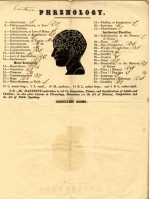 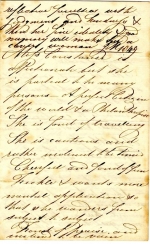