This May - the month of the 2015 United Kingdom general election - we take a look at some of the papers in the Archive concerning members of the Rothschild family who stood for Parliament, and were elected to the House of Commons.

Baron Lionel Nathan de Rothschild (1808-1879) is famous for his campaign to become the first Jewish Member of Parliament, and the struggle for Jewish emancipation. Lionel finally took his seat in the House of Commons as an MP for the City of London in 1858. Read more about his campaign in our online exhibition From Bank to Westminster »

In the 1899 by-election caused by Ferdinand's death, Natty's son, the scientist and natural historian Lionel (Walter), 2nd Lord Rothschild (1868-1937) was elected as the Liberal and Liberal Unionist Member of Parliament for Aylesbury, serving until 1910. Find out more about Rothschilds in politics »

Over 50 years after Baron Lionel took his seat, his grandson, also called Lionel Nathan de Rothschild (1882-1942) was elected to the House, serving as Conservative MP for the Vale of Aylesbury from 1910 to 1923.

Lionel was educated at Harrow and Trinity College Cambridge before taking his place as a partner at New Court. In the First World War he served in the reserves as a major in the Buckinghamshire Yeomanry and managed the City of London's recruiting office, earning an OBE and a 'valuable services' mention. From 1918, Lionel developed his estate of Exbury in Hampshire, famous for its rhododendrons and azaleas, which became his life's passion.

The United Kingdom general election of 1922 was held on Wednesday 15 November. It was the first election held after most of the Irish counties left the United Kingdom to form the Irish Free State, and was won by Andrew Bonar Law's Conservatives, who gained an overall majority over Labour, (led by J. R. Clynes), and a divided Liberal Party.

The Archive has some examples of election literature produced in support of Lionel's successful parliamentary campaign in 1922, including a pledge card distrubuted during Lionel's campaign stating:

He stands for -
1. Tranquillity and Stability at Home and Abroad.
2. Peace in the Near East.
3. No more Foreign Commitments.
4. Expenditure to be reduced to Lowest Level.
5. Reorganisation of Machinery of Government.
6. Our Word our Bond in Irish Treaty.
7. Ulster Freedom to be safeguarded.
8. Conference on Empire Trade.
9. Agriculture to be helped out of difficulties.
10. Reduction of Taxation. 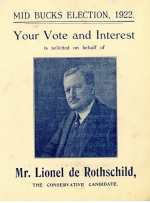