October 2014 marks the opening of a new Rothschild office in Milan. Rothschild has a historic relationship with Italy, having established an office in Naples in 1821.

The relationship with Italy was cemented when Carl Mayer von Rothschild (1784-1855) arrived in Naples in 1821 to establish the Italian branch of the family business, C. M. de Rothschild & Figli. Carl had three sons, Mayer, Adolphe and Wilhelm, all of whom were all involved in the business. Mayer and Wilhelm succeeded their uncle Amschel in Frankfurt and Adolphe succeeded his father in Naples upon his death in 1855.

The Naples house operated in the period between the end of the Napoleonic Wars and the reunification of Italy, in an atmosphere of conflict with other European powers, but also domestically within the governments of the various Italian Kingdoms. The Naples branch of the Rothschild business was the first to close, in 1863, with remaining business being transferred to the Frankfurt house.

Most records of Naples house were destroyed in 1901, when the Franfurt house closed. Some correspondence from C. M. de Rothschild & Figli to the London bank survives and amongst the 142 boxes of Sundry Private Correspondence, RAL XI/109, is a trade report for the Port of Molo San Carlo, Trieste. It shows the many countries that Italy and the Rothschilds were trading with at the beginning of the 19th century. 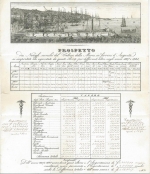 Trade report for goods imported and exported from Italy: 1827 and 1828