Nathaniel Mayer ('Natty'), 1st Lord Rothschild was the eldest son of Lionel and Charlotte de Rothschild and was born in London on 8 November 1840. He was a shy and reserved child, possessing few of the social skills of his siblings. Natty progressed to Cambridge after an education with private tutors, but he did not sit his final examinations. The time was not spent in vain: he joined the circle of friends of the Prince of Wales, the future Edward VII.

He made a love match with his cousin, Emma Louise (1844-1937), whom he married in her home city of Frankfurt on 17 April 1867. Noted for their enlighthened philanthropy, the couple were both concerned with welfare issues for their employees at Tring, and in the wider world. Natty held honorary positions in virtually every institution of Anglo-Jewry. He showed a particular interest in housing in the East End of London, through the 4% Industrial Dwellings Company.

Natty took over the senior partnership of the London House from his father who died in 1879. Under Natty, the bank made 70 loans, and was instrumental in establishing the Exploration Company to exploit new mining opportunities in the New World. Like his father, Natty was an MP, gaining Aylesbury for the Liberals in 1865. A baronet in succession to his uncle Anthony from 1876, Natty became the first Jewish peer in 1885, retaining his own name in his new title - Lord Rothschild of Tring. Natty died in London on 31 March 1915. 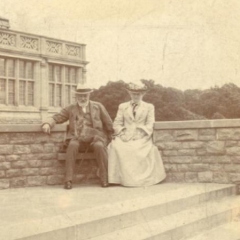