The 90 acres of grounds at Ascott were remodelled by Leopold in 1874. The gardens were laid out in discussion with the architect George Devey and the horticulturist Sir Harry Veitch.

The Ascott plan closely followed Francis Bacon’s design for an ‘ideal garden’ published in his Essay Of Gardens in 1625. Bacon’s dimensions and instructions were followed: formal parterres and topiary are contrasted with the natural scenery of the wilderness and the distant views of the Vale of Aylesbury. Bacon recommended fountains in his garden ‘for fountains are a great beauty and refreshment’. Leopold installed several fountains at Ascott, two of which were designed by a fashionable American sculptor, William Wetmore Storey.

Ascott boasts some remarkable topiary, including a sun-dial made of yew and box. The Roman numerals marking the hours are grown in box and the time of day is marked by the shadow of the tall central yew gnomon. Around the perimeter is a box-trimmed motto: ‘Light and shade by turn but love always’.

In 1950 ownership of the house was transferred to the National Trust.

[Mr Leopold de Rothschild] ".....regularly to be seen at all the shows of the Royal Horticultural Society, took great pride and interest in his gardens at Ascott and Gunnersbury.  He was famous as a grower of orchids, but this year as a war measure he ordered flowers to be replaced by fruit and vegetables. His kitchen gardens this year are probably the most prolific in the kingdom as far as private residences are concerned." 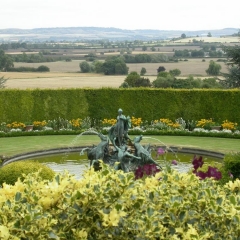 Looking into the Venus Garden at Ascott House