According to family tradition, Charles Rothschild (1877-1923), son of Nathaniel, 1st Lord Rothschild of Tring fell in love with the Northamptonshire countryside where he was searching for butterflies. He was particularly struck by an empty Elizabethan house, which by good forturne turned out to belong to his father Natty and which Charles persuaded his father to make it over to him. However the house was in a hollow and so deemed bad for the health. Charles accordingly commissioned the architect William Huckvale, who had worked on Rothschild properties at Tring, to build him a new house and at the same time rebuild the village nearby. Huckvale designed a rambling, Tudor-style manor house with a succession of gables and very large and pretty Elizabethan windows.

The gardens at Ashton Wold

Charles was styrongly influenced by the grandeur and luxury of the hothouses at Tring park where he grew up. At Ashton he began by engaging 14 gardeners, and a head gardener trained at Tring. The orchid houses at Ashton were famed and the pure white Cattleya which Charles gave to his father for his 70th birthday in 1910 was considered a miracle.

Charles considered himself a naturalist, rather than a horticulturist, and made many collecting expeditions around the world in pursuit of seeds and plants. A pioneer of environmental conservation, he formed the Society for the Promotion of Nature Reserves in 1912.

Charles' wife Rozsika (1870-1940) was a creative gardener and under her hand Ashton was endowed with grass lawns and paths, cascades of roses, banks of flocks, Virginia creepers, tea roses, over 200 yards of herbaceous borders, walls full of alpines and a water garden seemingly perpetually in bloom.

Dame Miriam Rothschild (1908-2005) inherited the house after her parents’ deaths, and over the next 30 years transformed the gardens into a haven for wild flowers. 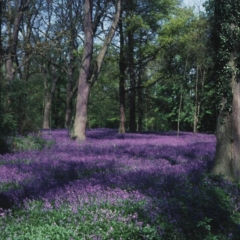