The Halton estate in Buckinghamshire was purchased by Lionel de Rothschild (1808-1879) in 1853 but it was not until the estate was inherited by his second son, Alfred (1842-1918), that Halton was actually used as a country residence by the family.

Alfred immediately set about building a new mansion, employing the architect William R. Rogers who designed Halton Mansion in the style of a French château. The house was the first to be designed and built for electric lighting, an innovation which greatly impressed contemporary visitors.

A magnificent gala opening took place on 19th January 1884, attended by the Prince of Wales. Guests were enthralled by the use of coloured lights on the mansion, gardens and fountains and Halton soon became renowned for its lavish entertaining.

The house was surrounded by conventional parterres and formal flower beds, carefully manicured lawns, winding paths and a surfeit of statues, urns, steps and balustrades. Over 60 full-time gardeners were employed to tend the hothouses and maintain the extensive grounds.

Alfred’s demands upon his staff could often be eccentric. On one occasion he is reputed to have asked to see rambler roses adorning the columns of his Winter Garden. Although it was entirely the wrong season for such an enterprise, the gardeners dutifully imported a large stock of the required roses from the Chelsea horticulturalist, Veitch; these they managed to train half-way up the columns and the remaining area was discreetly covered with artificial flowers and leaves which, at a distance, blended with the natural plants to look most convincing. Alfred was apparently delighted with the effect. 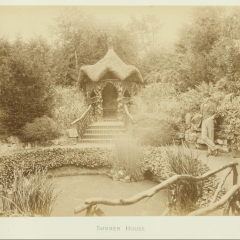