Many species and cultivars were named after members of the Rothschild family. At least seven species of orchids were named in honour of Rothschild gardeners. The Royal Horticultural Society's Dictionary of Gardening (2nd Edition) lists the following:

Paphiopedilum rothschildianum (Stein, 1892): an extremely rare orchid, endemic to the lower slopes of Mount Kinabalu in Borneo. The flowers are large with glossy green leaves and yellow and ivory white petals marked with maroon.

Ancistrochilus rothschildianus (O'Brien 1907): a West African epiphyte collected for Walter Rothschild in Nigeria. It has unusually large, pink and white flowers with a brown blotch on the lip.

Augraecum rothschildianus (O'Brien 1903): a fragrant epihyte discovered in 1878 in the environs of Victoria Nyanza by Major H.B. Rattray of the King's African Rifles.

Catasetum rothschilii (Rolfe, 1922): collected for Walter Rothschild, in whose honour it was named. The flowers are light green with the inside of the lip buff yellow.

Vanda Rothschildiana: a beautiful orchid with violet-blue flowers, chequered with darker markings, originally produced by Chassaing, the head-gardener at Ferrieres, in 1931 and named in honour of Walter, 2nd Lord Rothschild.

Rumex rothschildia (Aaronsohn and Evanari, 1940): named in honour of Baron Edmond de Rothschild who founded numerous agricultural settlements in Israel, it is a rare dock found on the sand dunes along the coastline in Israel.

Anthurium 'Rothschildianum' (1876): a variety of A. scherzerianum from Costa Rica.

Rhododendron rothschildii (Davidian 1972): named after Lionel de Rothschild (1882-1942) of Exbury. Found by Rock in Yunnan in 1929, in the wild the plant grows about 20 feet high but in cultivation it is a nine foot shrub.

Rhododendrons: At least twenty are named after Lionel de Rothschild's relatives. After his death a garden hybrid which he raised was named 'Lionel's Triumph' by his son Edmund de Rothschild (1916-2009). 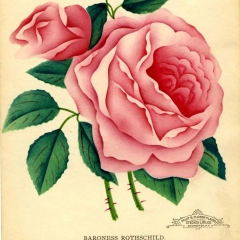