The 1986 British Gas sale was truly innovative. It represented a landmark in the privatisation policy of the Government, and a triumph for Margaret Thatcher. Both Government and advisers were confident enough to sell a major nationalised industry all in one go, rather than in tranches, and, as the first truly international privatisation offer, it demonstrated the growing interest of investors around the world.

With its massive market capitalisation, some £5.6 billion, and international share offerings, it could be described as 'the corporate financier's privatisation'. Shares were sold simultaneously in the UK, the US, Canada, Japan and Europe, with a common prospectus, common underwriting timetable, common fee structure and universal share claw back. The minimum allocation of 100 shares, costing £135 in 1986, would be worth over ten times the sale price today. Thirty years later, "Tell Sid" remains a byword for how a state-owned business should be put into private hands, leaving a legacy that means any government is obliged to consider offering the public opportunities in any privatisation.

N M Rothschild & Sons Limited was at the heart of the worldwide phenomenon of privatisation which swept across the globe in the 1980s and 1990s, and Rothschild has been widely acknowledged as both pioneer and leading adviser in the field of privatisation. Following the sale of British Gas, Rothschild was involved in the privatisation of British Steel (1988), the ten UK Water Authorities (1989), the twelve electricity distribution boards (1990), British Coal, British Telecom (1991) and many other international privatisations in the next decade. In 1997, British Gas was demerged to create Centrica, BG Group and Transco. The main British Gas brand is still used today as a subsidiary of Centrica. 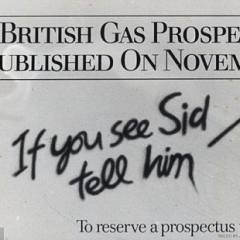 Detail of one of the many newspaper adverts to encourage investors