The Rothschilds demonstrated the same passion for excellence and individuality in their cars as they did in their businesses, houses and collections.

The history of motoring in England can be said to have begun in 1895. That year the Lanchester brothers produced one of the earliest British motor cars, and the first motorshow took place at the Tunbridge Wells Agricultural Showground in October, organised by Sir David Salomons, a country house owner. In the years before the First World War car ownership mushroomed from less than 10 in 1895 to over 16,000 registered cars by 1906 and over 150,000 by 1912. In 1895 there can have been few country houses which had been visited by a motor car, but by 1914 there can have been few country house families that did not own at least one motor. (See The Motor Car and the Country House, English Heritage, 2010).

Lionel de Rothschild (1882-1942), the great grandson of Nathan Mayer Rothschild is well-known for his horticultural interests at Exbury House, but he was also an early pioneer of motoring, and a founder member of the Royal Automobile Club. He and his brother Anthony Gustav (1887-1961) were members of the Cambridge University Automobile Club, founded in 1902.

Whilst at Trinity College, Lionel was summoned for “driving a motor car at a greater speed than 12 mph”, and fined the sum of £1.

Lionel favoured an early make of car called the Orleans. He had a faithful mechanic, a young man called Martin Harper who was working in his brother’s garage in Cambridge when he first met Lionel. Before the First World War Lionel and Harper drove Mercedes, Napiers, Wolseleys and Siddeleys across France, Italy, Spain, Germany and North Africa. Harper writes about these days in his book Mr Lionel: an Edwardian Episode (London: Cassell, 1970).

Lionel's goggles would cause trouble, as reported in The Times, 30 March, 1907:

Mr Lionel Nathan de Rothschild is under medical treatment at the Queen's Hotel, Birmingham, for injuries sustained in a motor-car accident at South Yardley on Thursday.  His injuries are not of a serious character.  They consist of superficial cuts about the face, caused by the goggles which Mr. Rothschild was wearing while driving the car, and which came into violent contact with the head of a horse attached to a milk float.

Combining his business skills with his great interest in things mechanical, Lionel served on the board of The Wolseley Tool & Motor Car Company Ltd between 1905 and 1909. Lionel was a keen advocate for Wolseley, and he and Harper often filed test reports back to them from their excursions. 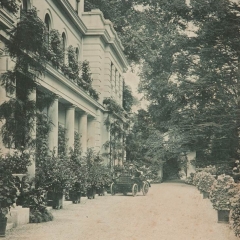 Lionel in his car (an Orleans) at Gunnersbury Park c.1903 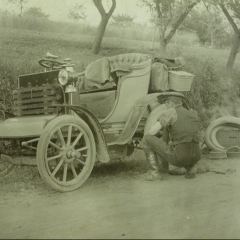