Anthony Gustav de Rothschild (1887-1961), had a passion for exotic luxury automobiles. In March of 1934, Anthony ordered a matching set of Hispano-Suizas, a K-6 for formal occasions, the other, a J12 for cruising around town. The two cars were ordered through Hispano-Suiza’s London Agent, J. Smith & Co. Ltd, and were sent to Fernandez & Darrin in Paris to receive the most striking bodies. The cars were finished in identical colors and complimentary styles.

Anthony’s car was a Coupe Chauffeur limousine which was built for the long wheelbase (146 ½”) K6 chassis. The body featured a teardrop–shaped closed passenger compartment whose raked windscreen matched that of the open chauffeur’s compartment. Top speed 88 mph. The K-6 Coupe Chauffeur remained with the Rothschild family until 1984.

On the shorter J12 chassis, a matching teardrop-shaped 4-passenger coupe was built and this was favoured by Anthony’s wife, Yvonne (1899-1977). The J12 was one of the most expensive Hispano-Suiza chassis, featuring a V12 engine similar to the fighter plane engines of the era. It had a top speed of 108 mph. The J-12 coupe was sold by the Rothschild family to industrialist A. J. McAlpine in 1949.

The Rothschild Hispano-Suizas were some of the most expensive cars of the day, costing $40,000 dollars for the pair, equivalent to about £8,000 in 1935 (about £300,000 today). They caused a sensation in London, and were quite unlike anything else to be seen on the roads. 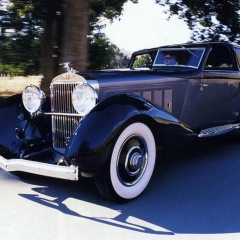