Like Hispano-Suiza, Bugatti was a highly individual and expensive brand. Bugatti was founded in Molsheim, France as a manufacturer of high performance automobiles by Ettore Bugatti, an Italian, often described as an eccentric genius. The original company is legendary for producing some of the most exclusive cars in the world, as well as some of the fastest.

Victor owned one of just a handful of Bugatti type 57SC Atlantics ever built. Designed by Jean Bugatti, Ettore Bugatti’s son, and Joseph Walter, the car was derived from the Bugatti Aerolithe Electron prototype shown at the 1935 Paris Auto Show. In 1936, Victor ordered the car in light blue, with a dark blue interior. The car was aluminium over ash wooden supports. Top speed was an impressive 125 mph, (0-60 mph in 10 seconds).

Victor only owned the car for a few years. Over the years the car had a succession of owners before ending up as part of the Williamson Bugatti collection in the states.

In 2010 the car was sold for a record £19 million to an undisclosed buyer, then the most expensive car ever sold at auction. 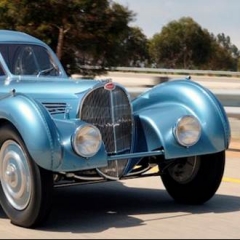