Alfred de Rothschild (1842-1918) became a partner at New Court, and in 1868, he became the first Jew to be elected a director of the Bank of England. His wide social circle formed a useful source of information, much appreciated by the Paris House in particular, and also supplied a long list of private clients, including many from the world of art and entertainment.

On the death of his father in 1879, Alfred inherited Halton in Buckinghamshire, building a new mansion as his country home, and when in town lived at 1, Seamore Place. Both houses formed magnificent backdrops to his exquisite art collections. He was a lavish host, and guests might be entertained by his personal orchestra or circus, of which Alfred was conductor and ringmaster respectively.

Alfred was a trustee of the National Gallery, and a founder trustee of the Wallace Collection. The strength of his personal collection of paintings lay in his ensemble of English female portraits of the 18th century. Among the Gainsboroughs were Mrs Beaufroy, Mrs Meares, Mrs Lowndes Stone-Norton and Mrs Villebois, but his favourite was a portrait by Joshua Reynolds of Lady Bamfylde; he even named a room at Halton after her.

Alfred was an enthusiastic collector, and began buying paintings in his early twenties, continuing until his death in 1918. Preferring to avoid auctions, he bought mainly through friends and family. He purchased some Dutch and Flemish paintings but clearly favoured the French and English 18th-century schools. Boucher, Greuze, Lancret, Pater and Watteau all featured among his collection. 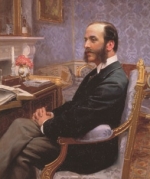