Charlotte de Rothschild (1825-1899), was the eldest child and only daughter of James and Betty de Rothschild. In 1842 she married her English cousin, Nat, the son of James's brother Nathan Rothschild.

Charlotte was amongst the most outstanding artistic characters in her family. In 1839 she studied music under Chopin, and published her own melodies. She studied watercolours under Eugène Lami, with whom she founded the Society of French Watercolour Painters. Between 1835 and 1890, her homes became the focus of celebrated soirées attended by the most gifted artists, musicians, literary figures and bibliophiles. She was noted for her sure eye and confident taste in the work of other artists.

Charlotte accumulated an impressive collection of paintings. These consisted largely of 18th-century French works, including many Chardins, Fragonards, Drouais and Greuzes, but the 19th century was also represented with Corot, Delacroix and Fromentin. English, Italian and Dutch artists were represented by Richard Parkes-Bonington and Turner, and a large number of paintings by Guardi, Ruysdael and Van der Heyden.

Her collection of Chardins was outstanding, and these she bequeathed to her grandson Henri, who organised an exhibition of Chardin's work with his son Philippe in 1929 at the Pigalle gallery in Paris. On her death in 1899, some of her magnificent collections were bequeathed to the Louvre, the Museum of Decorative Arts and the Cluny Museum.

Much of her collection was largely destroyed during the Second World War. 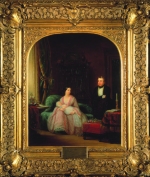