Ferdinand de Rothschild (18389-1898) lived near his relatives in London, mixing in the same social circles as his brother-in-law, Natty, and counting the Prince of Wales among his friends. Waddesdon, the magnificent property he commissioned in the Vale of Aylesbury, was the scene of splendid entertainment.

Beginning his collecting activities as early as 1861, Ferdinand de Rothschild acquired most of his paintings in the 1870s. His father had collected certain 17th-century Dutch paintings, and under the guidance of his mother Charlotte, Ferdinand learnt to distinguish the works of Teniers, Wouverman, Ostade and Both which hung in his father's house.

Ferdinand inherited these paintings and in time added van der Heyden, Gerard ter Borch, Cuyp, de Hooch, and Metsu to the Dutch collection. Two massive views of Venice by Guardi were purchased before the house was finished and influenced the final design of the gallery where they were to hang.

With his keen appreciation of the French arts of the 18th century, it was no surprise that the very first purchases he made were of works by Greuze. However, showing remarkable confidence and innovation, Ferdinand juxtaposed his fine collection of 18th-century English portraits with the French furnishings and objets d'art that filled Waddesdon Manor.

This collection included Gainsborough's Lady Sheffield and The Pink Boy, Reynold's Lady Jane Halliday and several female portraits by Romney, many of which hung in his own sitting room at Waddesdon. 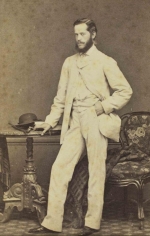