Adelheid, Baroness Edmond de Rothschild (1853-1935) was the mother of James, who bequeathed Waddesdon to the National Trust in 1957. She formed a great number of collections relating to costume, which are now held at Waddesdon Manor.

The grand-daughter of Carl Mayer (1788-1855), founder of the Naples branch of the family bank, Baroness Edmond was named after her grandmother, Carl Mayer's wife, Adelhieid Hertz (1800-1853). She was born in Frankfurt where her father, Wilhelm Carl, ran the original Rothschild banking house until it was wound up at his death in 1901. Her mother was Hannah Mathilde (1832-1924), elder sister of Ferdinand and Alice. Baroness Edmond's parents maintained a strict Jewish orthodox household, and she retained a strong faith until the end of her life. In 1877, at the age of 24, she married her cousin Edmond, from Paris.

In 1894, Baron and Baroness Edmond visited Waddesdon, where they were inspired by Ferdinand's grounds and recently-built Dairy, taking back several ideas to their house at Armainvilliers. Both Baron and Baroness Edmond were collectors. As they travelled, to places such as Persia (Iran), Russia and Turkey, they looked for antiquities and textiles. With three houses and a yacht, the Atmah, their acquisitions served as furnishings, but also satisfied their particular interests. Baroness Edmond followed the Rothschild taste for the French 18th century, but concentrated on costume and accessories: buttons, fans, lace, seals and textiles.

Baroness Edmond died a year after her husband. Their properties and collections were divided between their children. Dorothy (1895-1988), James' wife recorded the first crates arriving at Waddesdon in 1936, including furniture, paintings and porcelain. Some of the items bequeathed to James and Dorothy were stored at the Banque de France from April 1939, and were confiscated by the Nazis when Paris was occupied in 1940. Following the war, the objects were returned to the family, and came to Waddesdon between the late 1940s and 1960s. Dorothy displayed their collections alongside Ferdinand's and Alice's as a tribute to her parents­ in-law, and the enduring Rothschild style.

Baroness Edmond's collections include a small group of costume. As no one piece provides a complete example of fashionable dress, it is likely that she acquired these items because she liked the cut or pattern of the fabric, rather than as perfectly­ preserved illustrations of historical styles. Dorothy de Rothschild commented that her mother-in-law's "normal attire consisted of clothing which was drab but comfortable". However, surviving studio photographs show that she occasionally dressed up in reproduction 18th-century costume. These ensembles were embellished with historic buttons, lace and fans, examples of which can be seen in other cases in this room. Her tastes were influenced by 19th-century fashions for re-using 18th-century fabrics and accessories, and reviving 18th-century styles of dress.

In the 1970s, Baroness Edmond's collections were displayed in specially created museum rooms in former guest accommodation in Waddesdon's west wing. Called the Store Rooms because they exhibited treasures from the stores, they included a large case full of costume, textiles, lace and fans as a tribute by Dorothy to her mother-in-law's collecting tastes.

Alongside buttons, fans and costume, Baroness Edmond formed an important collection of lace from the 17th century to the early 19th century. In the late 1800s, it was fashionable for women both to collect and wear antique lace, and she trimmed fancy dress and ordinary clothes with examples from the 18th century. When not being worn, her lace, which includes a group of mid-18th century metal lace, was carefully stored in a velvet-covered chest.

Upon her death, at her request, Baroness Edmond's lace collection was split. Most of it was bequeathed to her daughter-in-law, Dorothy, and came to Waddesdon, but seventeen key pieces were donated to the Musee des Arts Decoratifs in Paris. Mainly examples of French and Brussels lace, they included handkerchiefs embroidered with her monogram, and 18th-century lace fronts for a waistcoat. Baroness Edmond's children carried out her wishes, and paid for a special case in which her gift of lace was exhibited in 1938.

Baroness Edmond began collecting buttons in the late 19th century, at a time when it was fashionable to acquire French bibelots (ornaments) of the 18th century. Other Rothschilds, such as Ferdinand and Alice, were similarly engaged, collecting gold boxes, jewellery, cane and parasol handles, and other small-scale metal objects.

Sets of buttons were purchased through Parisian antique dealers and jewellers, and from other European jewellers with outlets in Paris. Alongside names such as Gompers, A. Risler & Carre, Boin-Taburet and R Lalique, are J. Tostrup (1856-1890) and David Andersen (1843-1901), Norwegian silversmiths whose firms exist today.

The buttons were stored by set in small boxes within a lacquer chest. Baroness Edmond bequeathed them to her daughter­in-law, Dorothy, writing "I give to my dear Dolly the Indo­-Chinese coffer containing my collection of buttons. I also give her the antique buttons that decorate my dresses and coats".

The buttons were recovered in 1947, and later displayed by Dorothy in wall cases in the Blue Room (now the Goodwood Room) at Waddesdon Manor. This was one of the former bedrooms in the west wing, converted into display areas by the architect R.J. Page between 1968 and 1970.

However, Baroness Edmond was not only interested in buttons as glittering miniature examples of craftsmanship, but also as items of dress. She sought out colours - purples, blues, yellows - that suited her, and subjects - flowers, costume, classical scenes - that interested her. She wore buttons from her collection as fancy dress, and adorning ordinary clothes. She also acquired hat pins, which became necessary and extremely fashionable because of the large hat styles of the late 19th and early 20th centuries.

Fans in the 19th century were different from their 18th-century predecessors. They were larger in size and incorporated many mechanically-made elements. Still part of fashionable evening ensembles, and a requirement at Court, it was also possible to purchase antique fans from dealers, such as J. Duvelleroy, who supplied fans to the Rothschilds and to the British royal family. Earlier fans were often framed as decorations in bedrooms or dressing rooms.

Baroness Edmond collected and used 18th­ century fans as accessories when she wore fancy dress, and also as examples of craftsmanship. Nine fans were bequeathed to Dorothy de Rothschild, but were among the items seized by the Nazis, before their eventual arrival at Waddesdon.

Arthur de Rothschild (1851-1903) had almost two thousand ties, arranged in the drawers of a huge piece of furniture which he had built specially for the purpose. They were arranged by category, and by colour. He never wore the same tie or the same knot twice, and changed his tie two or three times a day to match the ornamentation on his shirt. They were arranged in two different libraries: in one, those he had not worn, in the other those he had already worn. From time to time, every six or seven weeks, he sent a parcel of magnificent ties to his friends. 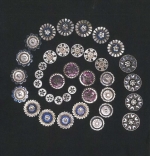 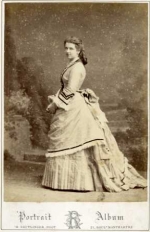