Mayer Carl married his cousin Louise at the London synagogue in Duke's Place on 6 April 1842. In Frankfurt, the couple lived at first on the Zeil, before acquiring a house on the Untermainkai and the Günthersburg mansion outside the city. Mayer Carl and Louise amassed an incomparable collection of over 5,000 works of art; by the time he died his art collection was so vast it took up a whole house in Frankfurt.

A large part of this collection consisted of gold and silver plate made in Augsburg and Nuremberg in the 16th century of which there were more than 400 items. During Mayer Carl's lifetime the collection was on display to the general public every Sunday. Drinking vessels, jugs, cups representing women, birds and cherubim, as well as ewers and chalices made up the collection. It also included some fine examples of work based on 16th-century engravings. Many involved not only gold and silver, but also other precious materials, such as jade, tortoiseshell, ivory and agate. The collection was described in two catalogues, published in 1883 and 1885. Today these volumes, with their exquisite photographic plates, are an important source for scholars of gold and silver work, and provenance researchers. Copies of these catalogues are in the Archive collection (RAL 000/2266):

Masterpieces of goldwork from the 14th-18th centuries. The collections of Baron Mayer Carl von Rothschild. Edited by F. Luthmer, architect and director of Kunstgewerkerschule, (Frankfurt am Main: Heinrich Keller) Series One, 1883 and Series Two, 1885. At his death in 1886, Mayer Carl left the collection to his daughters, and much of it descended to Philippe through his grandmother, Laura Thérese. It formed the starting point for the creation of the Museum at Mouton. Other members of the family who collected gold and silver objects were Leopold, Ferdinand, Alice and Adele, Baroness Salomon. See Mayer Carl von Rothschild: collector or patriot? in The Rothschild Archive Annual Review 2003-2004 for more information about Mayer Carl and his collections.

The collections of Ferdinand de Rothschild

Ferdinand de Rothschild (1839-1898) lavish collections were part of his ambition to create a room full of precious objets d'art in the tradition of the Renaissance courts of Europe. Ferdinand collected throughout his life, inheriting many pieces from his father, Anselm. 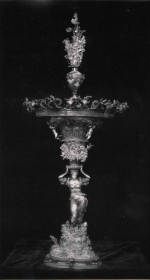 Part of the collection of Mayer Carl von Rothschild