The Waddesdon Bequest: the collection of Ferdinand de Rothschild

The jewels which Ferdinand de Rothschild (1839-1898) collected were part of his ambition to create a room full of precious objets d'art in the tradition of the Renaissance courts of Europe. Ferdinand collected jewels all through his life, a number of them inherited from his father, Anselm.

Adelheid von Rothschild (1853-1935) was one of the daughters of Wilhelm Carl von Rothschild (1828-1901) and Hannah Mathilde von Rothschild (1832-1924). Born into the Frankfurt branch of the family, she married her French cousin Edmond James de Rothschild (1845-1934) in 1877. Throughout her life, she was a keen collector of lace, costumes and accessories. In Paris, she lived at 41 rue de Faubourg Saint-Honoré, a short distance from the jeweller, Maurice Tripier at No.28. The Archive holds  small collection of jewellery designs for pieces Baroness Adelheid commisioned from Tripier, (RAL 000/2417).

Collections of the Viennese Rothschilds

In 2015, the descendants of the Viennese Rothschild family gifted to the Museum of Fine Arts, Boston, USA, an important collection of objects looted from the family during the Nazi era and ultimately restored to their rightful owners. The collection of 186 items, originally owned by Baron Alphonse Mayer (1878-1942) and Baroness Clarice (1894-1967) von Rothschild of Vienna, includes European decorative arts, furniture, prints, drawings, paintings, and personal objects including jewellery and jewelled objects, miniatures, and rare books, and was a gift of the heirs of Bettina Looram (née von Rothschild).

The collection features nearly 80 objects that were personally meaningful to the Rothschild family including items of Baroness Clarice von Rothschild's jewellery. Exquisite artistry and craftsmanship can be seen in objects such as a diamond necklace/tiara of the 1920s with nine stunning, pear-shaped diamonds, and an Art Deco brooch (Austrian, about 1937) incorporating two emerald beads. Read more about this collection on Museum of Fine Arts Boston website »

The Rothschild egg is a jewelled, enamelled, decorated egg that was made under the supervision of the Russian jeweller Peter Carl Fabergé by the workshop of Michael Perchin in 1902. Béatrice, Baroness Ephrussi (nee de Rothschild) (1864-1934) presented this egg to Germaine Halphen (1884-1975) upon her engagement to Béatrice's younger brother, Édouard Alphonse James de Rothschild (1868-1949).

Upon the hour, a diamond-set cockerel pops up from the top of the egg, flaps its wings four times, then nods his head three times, crowing all the while. This lasts for fifteen seconds, before the clock strikes the hour on a bell. It is one of the few significant Fabergé eggs that were not made for the Russian Imperial family, and it had been in the Rothschild family since it was first purchased. It was one of the most expensive eggs that Fabergé had ever made and sold.

It was sold by Christie's auction house on 28 November 2007, for £8.9 million (including commission). The price achieved by the egg set three auction records: it is the most expensive timepiece, Russian object, and Fabergé object ever sold at auction, surpassing the $9.6 million sale of the 1913 Winter egg in 2002. The egg was bought by Alexander Ivanov, the director of the Russian National Museum.  As of January 2019, the Rothschild egg is on display in Room 302 of the Hermitage's General Staff Building. 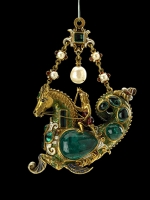 Part of the Waddesdon Bequest