Charles Rothschild (1877-1923) was an excellent botanist and specialised in orchids and the genus Iris. He brought home corms and seeds of the blue water lily from Lake Victoria. A special greenhouse was provided for them at Ashton Wold, where their flowers grew to a considerably larger size than in their native homeland. He collected and grew at Ashton and Tring almost all the then known species, so that the drawings by William Rickartson Dykes could be made from life for his monograph, 'The Genus Iris'. Charles bequeathed his collection of irises to the Royal Botanic Gardens at Kew.

Charles Rothschild was greatly excited by the beauty of moths and butterflies all his life. As a child his ambition was to own an Oleander Hawk Moth, and when he was convalescing in Switzerland, he collected gold spangled moths for each of his children. He went to great pains to search for species of butterfly, scouring a particular spot in the woods with a torch for the larvae and food-plant of a rare Hungarian butterfly, the life-cycle of which was then unknown. Charles promoted the establishment of a Nature Reserve at Puszta Peszer where the prohibition of collecting was strictly enforced.

In the field of entomology, Charles' brother Lionel Walter, 2nd Lord Rothschild (1868-1937) initially concentrated on beetles, but from 1895 he turned his attention to butterflies. His collection, mainly of butterflies and moths known as Macrolepidoptera, has been judged one of the greatest in the world. He went to great lengths to bring together large series of variations, breeding butterflies himself in Britain and hunting down rareties which came on the market. Together with one of his curators, Karl Jordan, Walter used his collection as the basis for a monograph on hawk moths which remains seminal in the field. The collection has enabled entomologists to analyse species from previously little collected areas.

Charles Rothschild's interest in fleas started with the purchase of some slides from a taxidermist which happened to include a specimen of an Australian 'helmet' flea. His collection began with his setting two mouse-traps in a hedge outside Tring. In one of these he caught a bank vole carrying several specimens of a flea called Typhlopsylla agyrtes. A number of collecting trips followed to Khartoum and the Sudan where, in 1901, Charles discovered the plague-carrying flea, then a new species, which he named Xenopsylla cheopis. Later the Indian Plague Commission sent him their flea material to work on, which led to an article in the Journal of Hygiene. Together with the entomologist Karl Jordan who worked at the Tring Museum, he produced numerous papers.

The partnership was particularly fruitful, and they continued collecting and publishing together even after Charles fell ill and was convalescing in Switzerland during the 1st world war. Charles' collection of fleas became one of the most valuable type collections in the world. As early as 1901, he intended to give them to the nation. He described some 500 new species and subspecies of fleas.

Three genera and seven species were named in his honour. He was the author, or co-author with Walter's entomological curator Jordan, of 150 papers.

Birds of Paradise and the Galapagos tortoises were his chief passion, but his most important contribution was with insects and birds, and during his lifetime, he collected 2. million butterflies and 300,000 bird skins. Believing that the comparative study of species could shed light on the study of evolution, he built up stunning series of species, specialising in taxonomy. Walter undertook field trips himself and also kept in touch with explorers and other collectors who carried on the hunt in every continent. In 1893 he procured the first entire specimen of the White or Square-mouthed Rhinoceros (Rhinoceros simus). Walter established a museum at Tring to house his collections, opening it to the public in 1892. Recognition of his service to the natural sciences was paid him not only with his election to the Royal Society in 1911, but also with the many species which were named after him. The collection was given to the British Museum which accepted the donation on 29 July 1938. 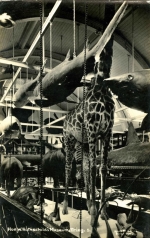