Adolphe de Rothschild (1823-1900) was an enthusiastic collector of objets d'art , and built up a fine collection of religious pieces, many dating back to the Renaissance, which he displayed at his house in the rue de Monceau.

He arranged his collections in glass cases in rooms where daylight entered through glass ceilings, and which, like those of a museum, were arranged solely for those admiring the objects on display, with benches around the walls.

The objects were organised by type or period, with some displayed in a dramatic setting. Adolphe's collection consisted of a remarkable series of reliquaries, monstrances, sacred vases and other pieces of religious jewellery and precious objects, which permitted the study of forms and techniques used in the workshops of the gold- and silversmiths of the 15th century.

When Adolphe bequeathed his objects to the Louvre, he entrusted them to the curator of the department of objets d'art, Emile Molinier, to edit the catalogue of the collection. He also left the resources for the construction of a new room with Flemish hangings and Italian flooring where he wished the objects to be kept together.

Ferdinand de Rothschild (1838-1898) collected Gothic sacred objects, the most important of which is the gold enamelled reliquary of the Holy Thorn of French origin and dating from the first decade of the 1400s. A thorn, supposedly from the Crown of Thorns, is set in a sapphire at the centre of a jewelled shrine depicting the scene of The Last Judgement.

There was also an early 16th-century elaborate tabernacle of highly carved boxwood which may have belonged to the Emperor Charles V. This is in detachable sections and opens like a flower to reveal minutely carved scenes on the inside of each 'petal' from the Life and Passion of Christ. Ferdinand also had a miniature altarpiece, again of boxwood dating from 1511, inside which were delicately carved biblical scenes. 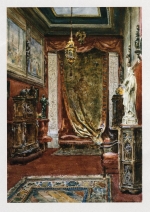 Interior of the house in the rue de Monceau where Adolphe von Rothschild displayed his collection.