In collecting Schatzkammer (literally 'Treasure Room') and Kunstkammern ('Art Cabinets') objects the Rothschilds were influenced by the wealthy Renaissance princes who kept cabinets of treasures or curiosities. The family's collections in this field were remarkable in England where few people had shown more than a passing interest.

The collection of Lionel de Rothschild (1808-1879) was probably the largest ever made. Ivories, mother-of-pearl, rock crystals, mounted tusks, horns, shells and nuts, Renaissance jewels, snuffboxes, Venetian and Flemish glass, majolica, Palissy and Henri II ware made up the collection.

One outstanding piece of craftsmanship was a mother-of-pearl model of a partridge, made by Georg Ryhl in about 1620 in Nuremburg. Its feet and beak were of silver gilt, while each feather was carved from a piece of mother-of-pearl. Among the items of metalwork were three finely modelled silver-gilt statuettes of Diana riding a stag ornamented with precious stones. They were probably part of a group of twenty similar models made in Augsburg for the coronation banquet of the Emperor Matthias in 1612.

The collections of Ferdinand de Rothschild

Ferdinand de Rothschild (1839-1898) lavish collections were part of his ambition to create a room full of precious objets d'art in the tradition of the Renaissance courts of Europe. Ferdinand collected throughout his life, inheriting many pieces from his father, Anselm. 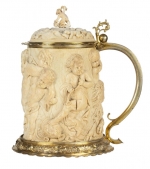