In 1909, the history of ballet was transformed with the first appearance in the West of Diaghilev's Ballets Russes, with Nijinsky and Pavlova at the Theatre du Chatelet in Paris. Prominent among the French backers for this first, historic season and for later years, was Henri de Rothschild (1872-1947). The connection with the Ballets Russes was to continue. In 1913, during their first London season, James de Rothschild commissioned the company's designer, Leon Bakst, to paint a series of panels on the theme of Sleeping Beauty for his London house, 34 Park Street. The panels, which incorporate visual references to the Rothschild household, can now be seen at Waddesdon Manor.

In post-war New York, Bethsabée de Rothschild (1914-1999), was drawn into the world of contemporary dance through the dynamic American choreographer, Martha Graham, of whom she became an enthusiastic supporter. In 1949, she published in Paris a study of the subject, La danse artistique aux U.S.A. Tendances modernes. In 1964 in Tel Aviv, where she settled, (adopting the Hebrew name Batsheva), she founded her own dance company, the Batsheva Dance Company, followed, in 1967, by a school of classical and modern dance. Joining forces with the distinguished dancer Jeannette Ordman as artistic director, her dance company, renamed the Bat-Dor, has gone on to win many international plaudits. 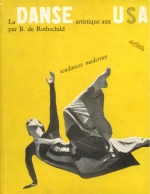