When, in November 1821, Metternich, the Imperial Austrian Chancellor, received an invitation from Amschel Rothschild (1773-1855) "to take soup with him" at his house in Frankfurt, he little expected the magnificent banquet which awaited him. It was a clear token of the Rothschilds' ascent in the financial and social worlds.

Food was, in fact, to become both a love and an important weapon in the Rothschild business armoury. In 1826, James de Rothschild (1792-1868), similarly demonstrating his newly won position in Paris society, took on the great chef Antonin Careme, formerly employed by the Prince Regent, by Talleyrand and the Tsar of Russia. Lady Morgan, an Irish novelist, visited James in 1829 and was overwhelmed by the elegant modern simplicity of the meal - "no high-spiced sauces, no dark-brown gravies, no flavour of cayenne and allspice" but "distillations of the most delicate viands, extracted in silver dews, with chemical precision". Careme named a soup, 'Potage Lady Morgan', in her honour and several of his recipes bear the name Rothschild.

Magnificence and scale needed the best chefs and the best technology. Rothschild kitchens were among the finest and best equipped to be found. At Ferriéres, the kitchens were detached from the main building to reduce the risk of fire - but were connected by an underground tunnel along which ran a small railway to carry the dishes on heated trays from kitchen to table.

Careme was the first of a line of distinguished chefs to be associated with the family. In recent years, Jean-Christophe Novelli, having become chef to Elie de Rothschild at the age of 20, went on to win a Michelin star at Gordleton Mill in Hampshire and moved in 1993 to the Four Seasons restaurant in Park Lane, London. Michel Roux, chef to Cécile de Rothschild from 1962 to 1967, went on to open Le Gavroche and, in 1972, the Waterside Inn at Bray in Berkshire. He has since received countless gastronomic honours.

Many recipes were created for members of the Rothschild family. This is a version of the famous recipe for Soufflé Rothschild (from Lord Rothschild's favourite recipes, compiled by Sarah Daniel, Stourton Press, London, 1989)

Soak the chopped glace fruit in the brandy overnight.

Butter the inside of a 15 cm (6 inch) souffle dish generously with 15g butter and lightly dust with 1 tablespoon castor sugar. Cut a band of greaseproof paper about 18 cm (7 inches) wide and long enough to go round the outside of the dish with a 5cm (2 inch) overlap.

Fold paper in half lengthways, butter the top half of one side and tie round the souffle dish with string. Melt 45g butter in a saucepan, add the flour and cook over a gentle heat for 1/2 minute. Add the milk and stir continuously until the mixture thickens and boils. Simmer for 5 seconds.

Remove from heat and stir in 3 tablespoons sugar and vanilla essence or vanilla pod and the glace cherries. Add the egg yolks one at a time, beating well after each addition. Whisk the egg whites very stiffly until firm peaks are formed. Fold a large tablespoon of egg white into the egg mixture to soften it, then fold in the remaining whites lightly.

Cook in the centre of a moderate oven for 30 minutes. Add the strawberries to the top of the souffle, cutting them in half if they are very large, then sprinkle with the remaining castor sugar. Continue cooking for a further 5 minutes. Serve immediately. 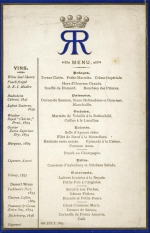 Menu card for a dinner to celebrate Nathaniel Mayer Rothschild being made a peer in 1885.

The Dining Room at Waddesdon Manor.