Members of the Rothschild family have been involved with the Freemasons, a fraternal organisation whose members are concerned with moral and spiritual values, self-improvement, and helping their communities with charitable endeavours.

The Rothschilds began to acquire large estates in Buckinghamshire in the 1840s. In 1836, Nathan Mayer Rothschild’s widow, Hannah (1783-1850), bought a few acres of land at Mentmore in Buckinghamshire for her sons so that they could take healthy exercise away from the city.  In 1850 Mayer bought the Manor of Mentmore for £12,400 and commissioned Joseph Paxton and his son-in-law George Stokes to build him a house. By 1900, different branches and generations of the family owned thousands of acres, so the Vale of Aylesbury almost became a Rothschild enclave, the most famous property being Waddesdon Manor, built by Baron Ferdinand de Rothschild (1839-1898).

This masonic lodge was etablished in Aylesbury in 1892. It was consecrated at the Five Arrows Hotel, Waddesdon on 30th May, 1892. The founding of the lodge brought Freemasonry to the district of Waddesdon, its name being derived from Baron Ferdinand who it was intended should be the first Master. He was in France at the time, of the consecration, where he was taken ill, and unable to be present, but was subsequently installed as second Master in June 1893. The initiation fee was seven guineas, joining fee three guineas and annual subscription three guineas.

On June 11th, 1892 ‘The Freemason’ reported "The Province of Buckinghamshire has steadily progressed since its separation from Berkshire, and it is now one lodge ahead of its late partner by the consecration on Monday, the 30th ult., of the Ferdinand de Rothschild Lodge, No. 2420 … a large number of brethren journeyed by rail from London to Aylesbury, where carriages were found to convey them to Waddesdon, which proved a most enjoyable drive of over five miles, the weather being delightful, and the country at its best. The lodge was opened punctual to time by Bro. Rev. J. Studholme Brownrigg D.P.G.M., and a hymn having being sung, he addressed the brethren on the motive of the meeting … the brethren adjourned to a spacious marquee, which had been erected on the lawn, and which was tastefully decorated with flags, flowers etc. A recherché repast was served in a really excellent manner, which not only reflected the highest credit on the worthy host, Mr Turnham, but which would have reflected credit on any of the principal Metropolitan hostelries.”

Both the Ferdinand de Rothschild and Concordia lodges are still active. 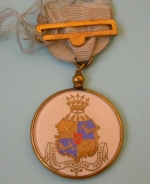 Masonic jewel belonging to F. Ritchings of Ferdinand de Rothschild Lodge (2420). Produced for the 21st anniversary of the lodge in 1913 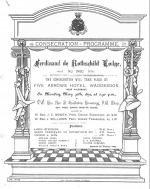 Consecration Programme for the Ferdinand de Rothschild Lodge in 1892