In 1909 a horse called Bomba won the coveted Ascot Gold Cup under the blue and gold colours of James de Rothschild. The Rothschilds’ successes and conduct within the Sport of Kings helped strengthen their position in a society where Jewish members could often count on an uphill struggle for acceptance.

The English Rothschilds began to own and compete race horses from the late 1830s. The sons of the founder of the London bank, Nathan Mayer Rothschild (1777-1836) were keen riders with hounds, having been encouraged by their mother to take up an active pastime to compensate for the hours spent indoors at the bank. The move from hunting to racing was a natural one, demonstrating the family’s social pretensions as at this time the pre-eminent race-horse owner in England was the Prince of Wales.

It was the youngest of Nathan’s sons, Mayer Amschel (1818-1874), who became an avid racing enthusiast. In 1843 he registered the Rothschild racing colours of dark blue and yellow, and began to train his horses under John Scott at Russley Park in Berkshire. Mayer also began to breed horses, establishing a stud farm at Crafton, near his country estate of Mentmore. Considerable success followed. In 1871 Mayer’s horses won four of the five classic races. His mare Hannah won the Oaks, the Thousand Guineas and the St Leger, and Favonius won the Derby. It famously became known as ‘The Baron’s Year.'

Leopold de Rothschild (1845-1917) was the nephew of Mayer Amschel and his natural successor in the field of horse-racing. He had become a keen race-goer during his college days at Cambridge, with regular trips to Newmarket. The more desperately his mother urged him to study ‘something – drawing, painting, music, languages’ – the more his interests turned elsewhere, principally to the turf.

Leo inherited Palace House in Newmarket which became his spiritual home. Here the Prince of Wales often stayed with him during race meetings, together with many prominent figures of the day. Leo also took over the running of his father’s stud at Gunnersbury before moving it to his own estate at Ascott. It became the Southcourt Stud farm, from where he bred many winners. In 1879 Leo registered the Rothschild colours in his name and had his first victory when a previously unknown horse, Sir Bevys, won the Epsom Derby. It transpired that the owner, a ‘Mr Acton’, was actually Leopold de Rothschild who had entered his late father’s horse into the race.

His next great hope for the Derby was in 1896 when his horse, St Frusquin, entered the race as the favourite. But after a close race, St Frusquin was beaten by a neck by the Prince of Wales’s horse Persimmon. At their next meeting St Frusquin was the victor, but his nerve failed in training for the St Leger and so there was not to be the eagerly awaited public rematch. Despite St Frusquin’s uneven performance, Leo headed the list of winning owners in 1896 with £46,766 prize money to his credit.

Leopold de Rothschild was to win the Derby for a second time in 1904 with St Amant, sired by St Frusquin. The race was memorable for the terrific thunderstorm which took place during the race. Newspapers reported how Leopold rushed out to meet the winner despite the weather: ‘he led him in with beaming face, unconscious of the diluvian rain which in a few seconds drenched him to the skin’. Soaking wet, horse, jockey and owner, were greeted with enthusiastic cheers and applause as they made their way into the winner’s enclosure. Read more about St Amant here »

In a career spanning thirty-eight years, the only classics which eluded Leopold were the Thousand Guineas and the Oaks. At his death, the sporting press devoted pages to his achievements, describing him as a ‘munificent turf patron.’

The French Rothschilds began to race horses as early as 1835 when Baron James Mayer de Rothschild (1792-1868) created racing stables at his Ferrières estate. Still in existence, now relocated to Normandy, the Rothschild stables are one of the oldest in France. Ferrières was the perfect location, close to both Paris and Chantilly, which was the centre of the horse-racing world in France.

Initially the majority of horses belonging to Baron James raced under the colours of their trainer, Thomas Carter, in amber vest, lilac sleeves and grey cap. This was soon changed to the now famous blue vest and yellow cap, variations of which are still used by different members of the Rothschild family.

The stables were successful in James’s lifetime with victories in the Grand Prix Royal in 1844 won by Drummer, and the Prix du Jockey Club in 1846 won by Médon. In 1868, brothers Alphonse and Gustave succeeded their father as joint-owners of the stables. In 1879 they decided to move from Ferrières to set up a stud farm at Meautry in Normandy, where the stud has remained to this day. From the very start Meautry established itself as one of France’s top breeding farms with winners such as Heaume and Le Roi Soleil.

Alphonse’s son Edouard (1868-1949) shared his father’s passion for horses and built a new mansion, Sans Souci bordering the training runs at Chantilly. Among the many winners bred and raced by Edouard was Brantôme, a colt who was unbeaten as a two-year-old, winning the French Triple Crown. He also won the coveted Arc de Triomphe and was featured in a short film, entitled: “Brantôme: Invincible Horse” which was played in French cinemas. When Brantôme died many years later, the newspaper headlines announced: “Brantôme de Rothschild is dead.”

The Austrian Rothschild family were also keen race-goers and thoroughbred owners. Unfortunately like the archives of the Viennese Bank, very little has survived to detail these interests. The three brothers Alphonse (1878-1942), Louis (1882-1955) and Eugène (1884-1976) were all members of the Austrian Jockey Club and Alphonse also had links with the Hungarian Jockey Club, based in Budapest.

The family were regular attendees at Vienna race meetings, as photographs included in this display illustrate. The collection includes photographs of the 1932 Vienna Derby winner, Ormond. Although it is highly likely that the Rothschilds kept stables at their various estates throughout the former Austro-Hungarian Empire, as yet no records have come to light to show whether they also owned training grounds or stud farms.

See The Racing Rothschilds: the sportsmen, the maverick and the legend in The Rothschild Archive Annual Review 2008-2009 for further information.

Engraving of Leopold de Rothschild and 'Pietri' and his trainer. c.1910 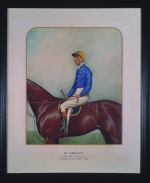