The company of composers and performers has been a repeating feature of Rothschild family history.

Chopin, Liszt, Paganini and Rossini (a close friend of Lionel de Rothschild (1808-1879) and his sisters) came often to the Paris salons of James' wife Baroness Betty de Rothschild (1805-1886). Some were lucky enough to be taught by masters: Chopin gave lessons to Betty, her daughter Charlotte (1825-1899) and her niece Hannah Mathilde (1832-1924), Rossini to Louise (1820-1894), daughter of Nathan Rothschild (1777-1836), and Mendelssohn to her sister Hannah (1815-1864), who also learnt the harp from the great master, Parish Alvers. With such inspiration, it is little wonder that some ventured themselves to compose. Charlotte, Betty's daughter, published some piano pieces in the style of Chopin. Most prolific by far was Hannah Mathilde who, in the 1850s and 1860s, composed a series of piano pieces and lieder based on words by Victor Hugo, Alfred de Musset, Goethe and others - many at the request of singers of the calibre of Adelina Patti.

At Halton and in London, Alfred de Rothschild (1842-1918) numbered Arthur Sullivan, Adelina Patti and Nellie Melba among his many musical friends and produced Liszt and Rubinstein for his London parties. In post-War France, Francis Poulenc, Elizabeth Schwarzkopf and Georges Auric were among the wide circle of musical friends of Robert (1880-1946) and Nelly de Rothschild (1886-1945). Alfred's contribution to music rested, not only on the six piano pieces, Les boutons de roses, which he wrote, one for each of the daughters of Mayer Carl (1820-1886) and his wife Louise (1820-1894); more lasting perhaps in the memory were the performances of his small orchestra at Halton, the players selected to be perfectly matched in height and in the shape of their moustaches, all conducted by Alfred himself with a diamond-studded ivory baton.

Marriage has brought a number of further musical connections. Marie Louise (1892-1975) and Nellie Beer (1886-1945) both married Rothschilds and were both great-nieces of the composer Giacomo Meyerbeer. Jacqueline de Rothschild (1911-2012) married the celebrated cellist, Gregor Piatigorsky. Louise's marriage produced a son, Alberto Franchetti, who went on to become a musician and composer. His operas included Asrael and Cristoforo Colombo.

Among recent generations, music has been both a love and a serious interest of Germaine de Rothschild (1884-1975), who, urged on by her son-in-law, the distinguished cellist, Gregor Piatigorsky, published a biography of Boccherini in 1962. The late Leopold de Rothschild (1927-2012), was a keen singer with the Bach Choir and its Chairman from 1976, playing a substantial role in the musical world, as, among other roles, Chairman of the Council of the Royal College of Music and of the English Chamber Orchestra and a Trustee of Glyndebourne. His niece, Charlotte, (b.1955) has become the family's first professional singer. Fittingly, her recitals often feature the songs of Hannah Mathilde. Charlotte has published on the Rothschilds' musical connections and has researched in detail the family's Livre d'Or. 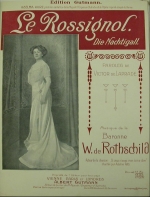 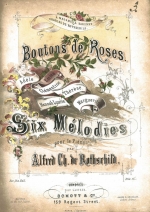