At a time when an interest in science might well have been considered an eccentricity - particularly in women - members of the Rothschild family were being given a grounding in the subject. In Frankfurt, in particular, science featured in the curriculum. Emma von Rothschild (1844-1935) took instruction in physics, maths and optics well into her adult years. Adelheid (1853-1935) encouraged her own daughter Alexandrine (1884-1965) to study medicine; she went on to specialise in dietetics while, also in France, Bethsabée (1914-1999) took advanced studies in biology.

In the 1930s, Victor, 3rd Lord Rothschild (1910-1990) earned a Cambridge doctorate for his study of the biochemistry of fertilization. His scientific knowledge and clear-sighted approach to research took him to the Chairmanship of the Agricultural Research Council and later the post of Group Research Co-ordinator for Royal Dutch Shell. In his later years, he turned to mathematics, and in particular the study of probability theory. In 1986, he published, with N. Logothetis, 'Probability Distributions'.

For well over a century, the Rothschild family has lent its support to medical research and services through its donations to and foundation of hospitals, clinics and research facilities. The interest of Henri de Rothschild (1872-1947) was both personal and scientific. As a child, his holidays were often spent with his mother, Laura Therese, among the patients in the children's hospital at Berck-sur-Mer which she had endowed. Henri became a specialist in infant medicine, publishing over 100 papers and making substantial practical contributions to the field. He built a hospital in the rue Marcadet in Paris (later the Mathilde-Henri de Rothschild Foundation) and set up milk distribution schemes and other practical projects to improve public health. During the First World War, while in charge of the military hospital at Soissons, he invented a portable burns unit for use in battle zones. In 1919 he became one of the founders of the Curie Foundation.

Long before the creation of national health services, then Rothschild family made provision for the care of the sick of every community.

The Fondation Rothschild was inaugurated in Paris in 1852 with the creation of a hospital on the rue Picpus, the first of many medical establishments endowed by the Rothschild family. The Fondation Ophtalmologique Adolphe de Rothschild opened in Paris in 1905 by the widow of a grateful Adolphe de Rothschild who had received treatment for an eye injury in Geneva, and who was encouraged by the specialist to establish a similar clinic in Paris. Specialist medical research has also been an object of support, in particular from family members with medical qualifications themselves. The Evelina Children's Hospital in London, the Carolinum clinic in Frankfurt, all established entirely with Rothschild funding, are major examples of an understanding of the services needed by the community at large.

The entrance to the Fondation Rothschild in Paris in the 1920s. 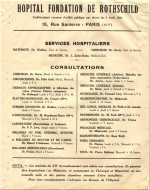 List of treatments available in the Fondation Rothschild in Paris in the 1920s.