The social circle of Alfred de Rothschild (1842-1918) included many friends from the world of music and theatre. His enthusiasm was matched by practical commitment. He helped to finance Sir Henry Irving at the Lyceum and was principal shareholder in his friend George Edwardes' Gaiety and Empire Theatres.

In France, the many-talented Henri de Rothschild (1872-1947) also turned to the theatre. In his 30s, under the name André Pascal, he began to write for the stage. His first one-acter ran for three months in Paris in 1906. A full-length comedy opened three years later and toured abroad. In all 37 of his plays were produced.

In the 1920s, Henri, like Alfred made a practical commitment to the stage, building the Theatre Pigalle in a state-of-the-art chrome and neon style. It opened on 10 October 1929 with a historical revue, L'Histoire de La France by Sacha Giutry. Thereafter, for two years, under the direction of Henri's son, Philippe (1902-1988), it was given over to the work of avant-garde playwrights. In 1931, Henri gave up active involvement with the theatre. It was demolished in 1957.

The line of theatrical involvement continued into the next generation. Philippe's daughter, the late Baroness Phillipine de Rothschild (1933-2014) was herself, for a time, an actress with the Comedie Française - and married its director, Jacques Sereys in 1961.

Support for theatrical development also continues into the present generation. The reconstruction of the Globe Theatre in London enjoyed the continual support of Sir Evelyn de Rothschild (b.1931), a Trustee of the Shakespeare's Globe Trust. 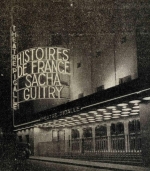